The social stigma and discrimination of autistic children is present in the movie Miracle Run. The life of Corrine Morgan-Thomas, the mother of autistic twins Stephen and Philip, changes drastically when she finally finds out that her sons are autistic. The first few doctors she takes her sons to are unable to diagnose them with any problem, saying that they are just fine; fortunately, Corrine takes her sons to a specialist who diagnoses the boys with Autism. Corrine’s initial reaction is that of shock. She does not like the idea that her sons are autistic, and leaves the hospital angrily. She does, however, end up realizing that the specialist was correct. When she tells her husband about their autism, he says he doesn’t want to deal with the autism, so she decides to leave him. She is determined to fight the social stigma of autism and to have her sons be treated like any other child, so she does not tell Stephen and Philip’s new school about their problem. The school accuses her of abusing her children, but then tells her that she ought to find another school for the boys when Corrine tells them about her twins’ autism. In the end her boys set their hearts to succeed and do succeed, proving that autistic children can do anything that any other child could do!

Mrs. Morgan loses the man in her life when her twin boys are diagnosed with autism. He just can’t handle this and has her leave home with the boys. Officials want them institutionalized, but Corrine, played excellently by Mary Louise Parker, has other ideas. She fights the system all the way to secure an education for the boys.

Parker conveys a level headed woman’s frustration in fighting the system. Her performance is believable.

When the school district is forced to act, a special education tutor is provided. While he works wonders with the boys,funding to pay him dries up. He has taught Corrine how to deal with her sons and miraculously, by the next scene, several years has passed and the boys are teenagers pursuing the guitar, running, geography, astronomy and other activities. How they achieve so rapidly is conveniently omitted. With this omission, the film does not fail as it is inspiring and faithful to the human spirit. 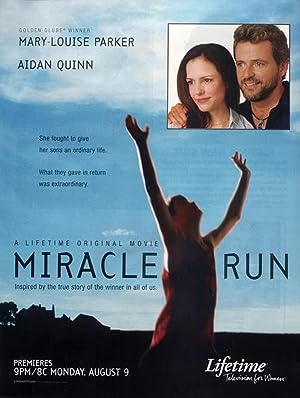