A teenage girl and her little brother must survive a wild 24 hours during which a mass hysteria of unknown origins causes parents to turn violently on their own kids.

To be fair this is the best movie Cage has done in years but that’s not really saying much now is it. Its trashy and silly but its very well done for what it is. Cage Hams it up with his wacko faces and obviously makes it easy looking like a crazed lunatic. Selma Blair is even creepier as you never know what she is going to do next.

Lance Henriksen ( Aliens ) makes an amazing cameo and you can’t help but laugh out loud. There isn’t loads of blood and guts and I was expecting more but a lot of it is left to the imagination which is a good thing.

Watch this film and take it with a pinch of salt, don’t go expecting anything deep or meaningful as this is just pure tongue in cheek. Ill give it a 7/10, I was expecting way worse but I was pleasantly surprised at how well done it was.

Just remember this film next time you see Mom and Dad !! 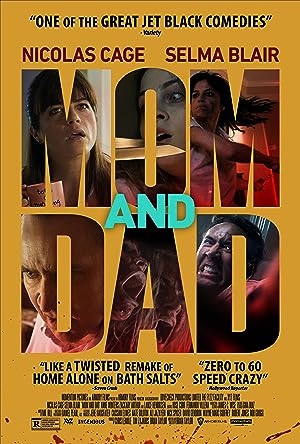 Be the first to review “Mom and Dad 2017” Cancel reply