Julien and his mum care for each other very much. But Julien has committed a deadly sin: he is growing into a teenager! Worse, he has found himself a girlfriend of his age. “Mummy” is not going to tolerate such an ignominy. Julien is HER baby and will remain HERS for ever, encouraged in her “crusade” by her bovine husband and barely thwarted by the more courageous interventions of Suzanne, Julien’s sympathetic big sister.

a mother. her family. and her son. scenes from a war. picture of a disorganized family. more than a film, a scale of tension, emotions, desires. because the possessive mother, the disobedient son, the absent father are only masks of a society. the refuges – football, grand mother piano lessons, the girl friend , career are fragile refuges. essence – nuances of fear. the fear of mother for future failure of Julien. the fear of father front of every day events. the fear of son , like fear of each teenager to be out of circle. and the seed of fear – different definition of love. nothing else. only a precise beautiful performance of each actor and the subtle picture of each piece of crisis. a cold movie. but suitable for everyday bruises. 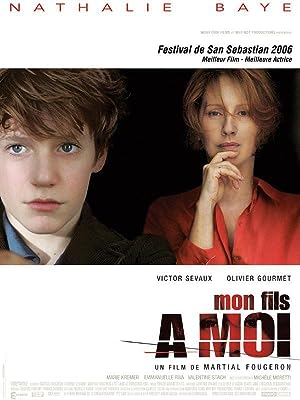 2 reviews for Mon fils a moi 2006 with English Subtitles