German filmmaker Vincent Dieutre is accompanied by a close friend’s teenage son on a trip to Berlin and in the process reminisces about his life as a gay man in his 2003 autobiographical documentary entitled Mon Voyage d’Hiver (My Voyage in Winter). Dieutre and his traveling companion, Itvan, visit numerous friends and landmarks, all holding special meaning to the 40-year-old filmmaker as they make their way to the German capital. As the pair grows closer as friends, Dieutre also takes on a paternalistic relationship with the boy as he details his own journey of self discovery — partially to assist Itvan with his own adult transformation, but also as a means for Dieutre’s own legacy to endure. My Voyage in Winter was selected for inclusion into the Forum Program of the 2003 Berlin International Film Festival.

I’ve seen this movie recently, and was very surprised to see nobody commented on it yet. The point of this movie are, so obviously, not the story, the characters or the plot, but simply “the atmosphere”. I’m not saying it’s a good film, simply that I liked it. At the show I was attending almost everyone walked out of the theater, but I decided to just sit back and enjoy this strange “winter journey” film. It was hard to understand what it was about, but I didn’t care: pointless art movie or not, it was much more bearable than “Charlie’s Angels: Full Throttle”. Now, they didn’t walk out of the that one, right? 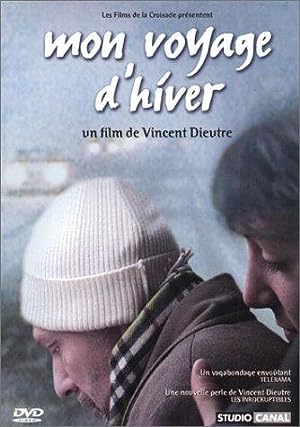 My Winter Journey (2003)
104 min|Drama|19 Nov 2003
6.6Rating: 6.6 / 10 from 80 users
German filmmaker Vincent Dieutre is accompanied by a close friend's teenage son on a trip to Berlin and in the process reminisces about his life as a gay man in his 2003 autobiographical …
Director: Vincent Dieutre
Creator: Vincent Dieutre
Actors: Itvan Kebadian, Vincent Dieutre, Andreas Staier, Christoph Pregardien