Begoña is a thirty something consultant who has rebelled against her upper-middle-class background and has overdone it with sex ever since her youth. On recommendation of her psychoanalyst she keeps a video diary of her encounters. On Christmas Eve, reluctantly, Begoña goes to have dinner with her dysfunctional family: her stern mother, her married brother and her younger sister. Soon, Begoña, the family’s black sheep, clash with her relatives.

Ok.. this is not an easy film to see, but I have to confess that I enjoyed every minute of the gross and rudeness of it… The performances are all great (at less I think they were all much more than believable) specially Laura Morante as Begoña… wow! The presence of Miguel Bosé was quite good, and the performance of young Miguel Angel Garcia was quite fine, even impressive… I think that this picture might be misunderstood as a poor and grotesque film but in fact I see it much more like an introspection of the human nature before adversities… Vicente Aranda probes to be a very risked director… I loved his work in Amantes but this is a total different kind of film making. Great ending, great ideas… pure originality. If you like bizarre movies about the alienation of human beings this is the one! 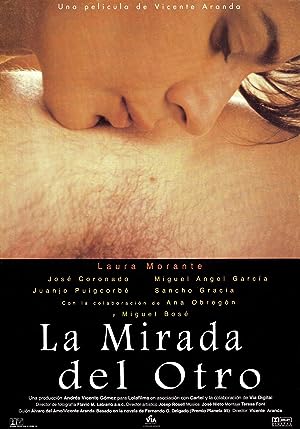 The Naked Eye (1998)
104 min|Drama|20 Feb 1998
4.8Rating: 4.8 / 10 from 396 users
Begoña is a thirty something consultant who has rebelled against her upper-middle-class background and has overdone it with sex ever since her youth. On recommendation of her psychoanalyst …
Director: Vicente Aranda
Creator: Álvaro del Amo (screenplay), Vicente Aranda (screenplay), Fernando G. Delgado (novel)
Actors: Laura Morante, José Coronado, Miguel Ángel García, Juanjo Puigcorbé