When an employee of Mumbai’s Chandan Nagar leaves, he is replaced by a youth, Fatka, who has a stray dog, Bhidu (a.k.a. Buddy). There is no accommodation provided for this homeless orphan, so he and his pet decide to make an abandoned antique car their new home. There is some resentment from the children of the building, but Fatka gets accepted in the cricket team after he demonstrates his bowling capabilities. A chance visit by a politician, Shashikant Bhide, results in enforcement of new municipal legislation to capture all stray dogs, and the children decide to oppose it. Their attempt to secure 31 signatures from residents turns out to be in vain, and they decide to launch a unique protest. Shashikant puts pressure on Chandan Nagar’s Secretary, Tandon, as well as launches his own campaign to enforce the legislation and ensure Bhidu’s capture.

CHILLAR PARTY is not just for kids, but for grownups as well. A story of grit and determination, it works not just as an entertainer, but also advocates a message rather strongly. A film that deserves to be tax-exempted so that it reaches out to a wider audience. A small film with a gigantic spirit… Encourage this one!

Every kid in the film pitches in a winning performance – Jhangiya enacted by Naman, Shaolin Divij, Enclyclopedia Sanath, Silencer Vedant, Aflatoon Aarav, Panauti Chinmay, Toothpaste Sherya, Akram Rohan, Second Hand Visshesh and Fatka Irfan Khan. It would be unfair and unjust to single out just one of them. As a matter of fact, you just can’t help but fall in love with each of them. Ditto for the supporting actors, who enact the role of the parents and also the conniving politician. 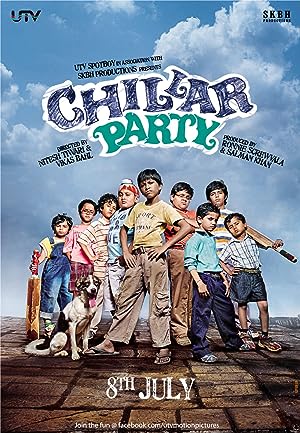