Home » Non-English with Subtitles » Nanami: The Inferno of First Love 1968 with English Subtitles

Nanami: The Inferno of First Love 1968 with English Subtitles

In the seminal tragedy of a love story, which is shot in a documentary style, a young and inexperienced man falls for a nude and desirable model and the consequences are painful. The hot spots of downtown Tokyo are magical while it lasts however.

This is an actual question in the film, something to seriously meditate on. The riddle suggests the answer (that we get nothing), but the answer given challenges our preconceived notion.

Can we say we get nothing from the peeling of the onion? We still have an onion (peeled away) and the peeling has happened, there is change, movement, progression. This is how I feel the film functions as New Wave. If we peel it to arrive at a core we may be frustrated, but if we come for the peeling instead? For the process of transformation itself?

So, if you peel life what do you get? In a marvelous hypnosis scene, a young man is called by the doctor to visualize a screen and see what goes there. Do we project ourselves upon the images on screen or does the screen upon us?

The first love here is awkward, erratic, youthful, perhaps not love at all. The inferno is society and the self, or the self trying to cope with society. I like how the portrait of youth is angsty but loving, how the folly of youth is embraced. In Yoshishige Yoshida’s Eros + Massacre from the following year, the two young students living in a modern Japan are aimless, disaffected, they act as though they know. Here the young couple fumbles in the dark, only now getting to know that the world is a dark place.

And if we peel cinema, what do we get then? If we begin to disassimilate the narrative in the effort to see what exists inside and examine the parts, do they make a whole or do we make it by our presence as viewers; this is why Inferno is valuable to me, because I’m always on the lookout for films the peel away the language of cinema, tweak and contort image to see will it break down at some point to reveal truth.

Oh, we may get nothing at all eventually, or have a helluva hard time convincing others that nothingness itself is the most valuable, but we are still not at the point where we started. Meaning a journey has taken place that dislocated us, our sense, our sense of image.

In this sense this is a true New Wave film. As with Godard the breach with traditional narrative is desirable here, unlike Godard though Nanami is not reactionary, it’s angsty or unorthodox because it has a reason. Nanami’s society hasn’t solved its problems yet like the French New Wave’s has, or perhaps in having solved some of them, a yawning chasm that goes back in time is revealed. 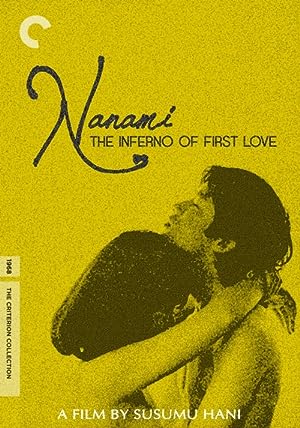 Be the first to review “Nanami: The Inferno of First Love 1968 with English Subtitles” Cancel reply