Teen detective Nancy Drew accompanies her father on a business trip to Los Angeles, where she happens upon clues to a murder mystery involving a movie star.

To be honest, I had to go see this movie backwards, didn’t expect that much, but hey, I was not deceived, I had a good time.

I would say this movie is way a fresh breeze, despite some facts that they tried to modernize Nancy Drew, but this made me remember these youth movies of the 60-70s from Europe and Quebec, where they manage to have children getting interacting with adults. In this case, a 16 year-old teenager tries to do justice by trying to solve a mystery concerning the death of an actress who died 25 years ago. Anyway, as her dad had business in Hollywood, why not rent a home with a mystery behind doors ? Well, at least Emma Roberts does a great job here. Kinda like the chubby kid, who at first is naively brought to support his sister’s pranks to Nancy, but at the end, found Nancy quite cool enough to stick with her, even with her matters…

Rest of the supporting cast is great, and was happy to see Rachael Leigh Cook in a different role this time: a single mother (she did it in Family Rescue, but this time, she plays a mature woman…) Anyway, don’t dump this, it is fun! 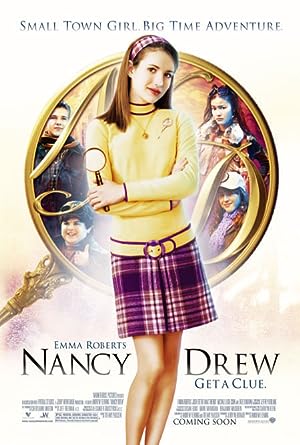 Be the first to review “Nancy Drew 2007” Cancel reply