Napola Before The Wall 2004 with English Subtitles

In 1942, Friedrich Weimer’s boxing skills get him an appointment to a National Political Academy (NaPolA) – high schools that produce Nazi elite. Over his father’s objections, Friedrich enrolls, seeing this as his ticket out of factory life to university and a good salary. During his year in seventh column (fifth form), this innocence is altered as Friedrich encounters hazing, cruelty, death, and the Nazi code. His friendship with Albrecht, the ascetic son of the area’s governor, is central to this education; a night in the forest hunting for escaped Russian POWs brings things to a head.

NAPOLA is on screen in a German Film festival touring Australia and like DOWNFALL may get a proper cinema release. It is certainly a commercial film. Not unlike Dead Poets Society but in a Nazi sports academy instead, NAPOLA features an exceptionally good looking cast and really absorbing locations and detail. I found it quite an experience to sit with a largely German audience, many of whom were clearly old age couples and a lot of 30 somethings who were Jewish. Those Anglos like me and my friends enjoyed the atmosphere provided by the audience as much as this very well made film. It is the first time ever I have been able to really feel (what I have always only imagined) a true sense of the thrill that German WW2 teenagers had by joining an elite Nazi regime, their sense of belong to something that was glorious and encompassing. Some more brutal elements from the teachers and Nazi hierarchy I personally found not too far removed from my experience of Catholic school in late (anti-vietnam) 1968! Sorry about that but it really did. Another person commenting on this page is angry that the film is misleading from his genuine Napola experience and it is well worth reading his comments as he was actually there in 38-42. I am sure he would know. However for today, NAPOLA needs to speak to a new audience and present an experience in a new and idealized way to people who have only imagined what it was like; I think the film must fit that in order to succeed as a film in 2005. I found that acceptable. There is many strong physical and emotional scenes, the teen casting is quite ideal and the castle location is eerie and medieval and exactly what I have seen in Hitler Youth Documentaries: turrets, Nazi flags, flames, stone walls etc….it all looks evocative and thrilling in cinemascope. For a 20 something audience this film succeeds well for them, those older might see it as a Nazi pantomime with overtones and snowy style of “The Emperor’s Club” or “Dead Poets Society”. But for a look into a thrilling and brutal world of elite Nazi sports and harsh idealism, NAPOLA is a very commercial and visually successful film. One sensational scene under the ice on a lake is right out of DAMIEN OMEN 2 and a bit of TITANIC thrown in as well. It is a great scene and quite heartbreaking. The use of snowflakes is particularly emotional in several scenes. If NAPOLA gets a commercial release I would certainly suggest you see it, it delivers what we as an audience want to see in a Nazi teen movie, especially with ideal casting and production values. I also find it quite interesting to see modern German film makers explaining the Nazi past in what seems to be a brave attempt at being honest about its seduction of morals and values and visual excitement. 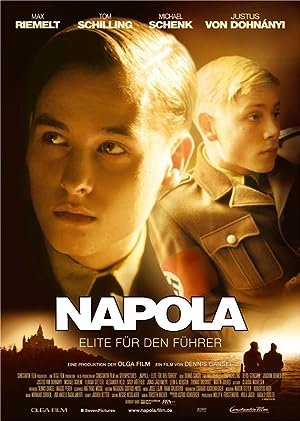 3 reviews for Napola Before The Wall 2004 with English Subtitles