Raised on the streets of turn-of-the century London, orphaned Peter and his pals survive by their fearless wits as cunning young pickpockets. Now, they’ve been rounded up by their mentor Jimmy Hook to snatch a priceless, some believe, magical treasure which transports them to another world. Neverland is a realm of white jungles and legendary mysteries of eternal youth, where unknown friends and enemies snatched from time welcome the new travelers with both excitement and trepidation. These groups include a band of 18th century pirates led by the power-mad Elizabeth Bonny, and the Native American Kaw tribe led by a Holy Man, which has protected the secret of the tree spirits from Bonny and her gang for ages, and that has meant war. But as the fight to save this strange and beautiful world becomes vital, Hook, Peter, and the ragamuffin lost boys consider that growing old somewhere in time could be less important than growing up, right here in their new home called Neverland.

I wondered just how much similarity SyFy’s version of a Peter Pan prequel would have with the Dave Barry/Ridley Pearson “Peter and the Starcatchers” series, and come to find out there actually is some. A powder that has the ability to make one fly (“Starstuff”), an obsessed crocodile (“Mr. Grin”), and the names of Peter’s mates — not the first group, who returned to England at the end of the first book, but the next group: Slightly, Tootles, Curly, Nibs, and The Twins.

There’s also a bit of a hat tip to Michael Scott and his “The Secrets of the Immortal Nicholas Flamel” series in “Dr. Flood”, who introduced himself as the Alchemyst to Queen Elizabeth the First. Of course, her majesty’s Alchemyst was Dr. John Dee, who actually had nothing to do with the Philosopher’s (or Sorcerer’s) Stone; that was Nicholas Flamel…which brings us to yet another great series of books, this time by J.K. Rowling!

By the way, I’m almost 68 years old and I still enjoy books and movies of this sort! 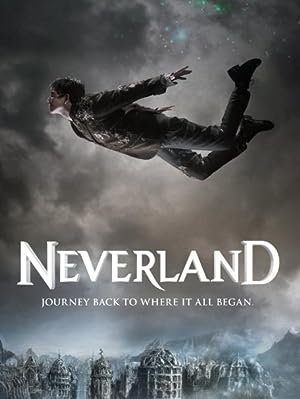 Be the first to review “Neverland 2011” Cancel reply