One night he will fetch the silver from the night sky Jonas loves his fathers magical stories. When Helge dies, Jonas ends up in an orphanage whereupon dreariness and discipline rule his life until a group of circus performers appear in the village.

Before starting my review, I must say that I’m French… So, sorry for my English which is rudimentary! :-/ Let’s talk about a German movie as rare as inspired: Nimmermeer (Nevermore, in English) ! Strongly influenced by very long Nordic films Pelle the Conqueror (by Bille August) and Fanny and Alexander (by Ingmar Bergman), Nimmermeer tells the story of a young child faced to the brutal world of adults. Jonas and his father, Helge, live in a small fishing village located on the coast of the North Sea. Very poor, they are very happy together and love each other greatly. The father, fisherman very respected in his community, often tells fantasy stories to his son who then starts to go deep in dreams… But Helge dies suddenly and Jonas becomes orphan from one day to another. The other fishermen of the village not very concerned by the situation, it’s finally the pastor who decides to take him home… For the greatest misfortune of Jonas ! Tyrannical, demanding discipline and an unfailing submission from the child, this man proves to be not as sweet and loving as his late father and does not share the same values of respect, tolerance, work and love that are so many and precious legacies for Jonas ! As these wonderful stories that told Helge. Desperate, the young child meets one day Grido, a dwarf magician who works in a traveling circus and will restore him the taste of life telling fabulous stories and fairy adventures ! More than a new father, Grido will become a guide for Jonas and invite him to open the door of a magical universe… Toke Constantin Hebbeln’s work deals with one of my favorite themes: the power of the dream and its positive impact on reality. As in Pan’s Labyrinth and Brazil, only the dream can give strength and hope when everything is going wrong around you. And sometimes it is this immaterial force that could allow any of us to move colossal mountains ! I am intimately convinced ! Childhood (his relationship to the adult world and the “transition” from one to the other) is the second major subject of the film. The idea that adults must guide and respect the child as his equal and even more (childhood is future !) is implicitly pounded throughout the movie. Of course, the themes of education, family, fatherhood and love are also present, being directly related to childhood. Death and mourning are also discussed but treatment is quite classical on the whole. From a technical point of view, the “good points” are many: a haunting and melancholic soundtrack (a very great BRAVO to Martina Eisenreich for his work), a perfect photography (to tell you, I have not yet found better… This “mixture” of sepia, blue, black, and beige… Even the remarkable Avalon by Mamoru Oshii is a notch below !), an excellent interpretation (Manni Laudenbach, who interprets Grido, is prodigious and his elocution would catch the most undisciplined audience !) and a mastered direction. We understand better the awards obtained by this masterpiece, including the famous Foreign Film Award from the Student Academy Awards 2007. Sensitive, moving, poetic, beautiful, deeply intelligent and speaking both to adults and children, Nimmermeer has only a single default: to be on TV too rarely ! Between the Fantastico-philosophical tale and the social fable, this ambitious medium-length film was not far to be in my Top 30 ! But despite this, it remains my favorite movie in this so particular format of which is one of the worthy representatives ! A must-see ! To see my review in (good ^^) french, you can go on my website “Le cinéma d’Arkelios”. 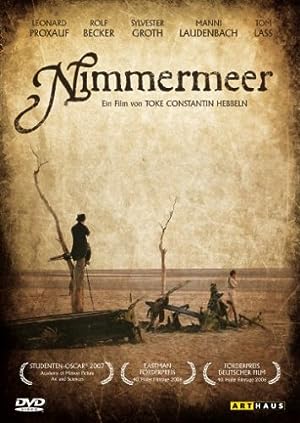 1 review for Nimmermeer 2006 with English Subtitles