The sun rises and Lara, Ettore, Emma and Giacomo wake up in different places: Lara on his bed; Ettore, on the couch of a friend; Emma, in a busy theater, and Giacomo, in the house of her aunt. Not likely, but they are a family, very close once; today, something less. We are about to witness one day in their lives: frantic, complicated, ordinary and special.
(Google translated)

It’s a special day for Giacomo, the youngest son of Ettore and Lara: he has to take the final exam of the secondary school. What for a normal family should be an opportunity to spend time together, it is not for Ettore and Lara, a separated couple, nor for Giacomo and his sister Emma, a twenty years old girl. The movie shows a 24 hours story, during which every member of the family has to face its own problems, at the same time trying to get closer to each others. Following these goals, the four will meet and collide several times. The relationships between the girl and her mother and the boy and his father are both complicated: while Lara and Emma argue all the time, Giacomo cannot trust his father as Ettore is not able to be a reliable father for his son. The soundtrack is the star of a very important scene of the film. The song ‘Dancing in the moonlight ‘ is associated with the first peaceful moment of the day: the time when the four main characters meet each other in peacefulness, being close and carefree. After his first movie, ‘Scialla’, Francesco Bruni is confirmed as a good director. Noi 4 is a more mature film than the first one, and hides – behind an apparent lightness – a capacity for analysis and interpretation of daily life that I really appreciated. I also liked the cast and the setting: Rome. The director shows us unseen and unexpected angles of the city, like the underground, rich of antique history, or the area of Piazza Vittorio , the scene of an authentic melting pot. I think that the movie is an example of good Italian featuring. 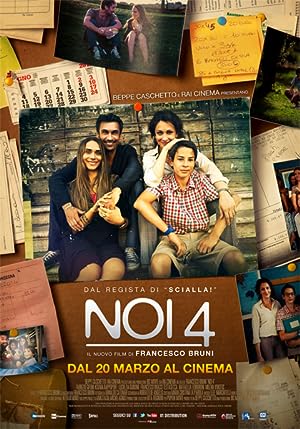