Vassili is an aged prostitute with killer instincts. He finds an unconscious young man in the Forest of Boulogne and takes him home. Now lovers and accomplices, the two men become a couple in prostitution and steal from their clients. And yet, menaces of retaliation leave the couple with no choice but to escape from Paris. The runaway begins…

This film is about a middle aged male prostitute befriending a young rival by chance. They become romantic and business partners, with unexpected results.

“Notre Paradis” is am unexpectedly dark film. The film synopsis doesn’t tell you what exactly happens in the plot, so i was surprised to see the recurrent dark incidents. Vassili is egging and getting less desirable in the superficial world. Angelo is young and handsome, but we know nothing about his past, which is likely a scarred one. They both need each other to survive. They look for their paradise, no matter what the cost is. The ending is a somewhat Hollywood ending, but i find it not as satisfying as it takes away the dark edge of the plot. It is still a thought provoking film. What price would we pay to live our dream? 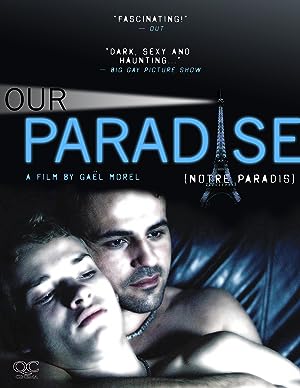