In a middle class neighborhood in a city in the countryside of Brazil, the real estate speculation is a menace to the affective memory of a group of friends. Their answer to this imminent transformation is to fuck in the construction sites. And what about love? Is love just a construction?

Gustavo Vinagre. Rimming. Fellatio. Gustavo Vinagre. Sodomy. Masturbation. Gustavo Vinagre. Group sex. Gerontophilia. More Gustavo Vinagre. What else? Narcissism. I can’t remember. Gustavo Vinagre is top and bottom, instigator and participant, giver and receiver, he does it all in front of the camera, so nobody can tell him that he pushed his cast into sexual situations while he stayed behind the camera watching. As evidence his «private parts» (what an ugly and funny way to call them!) are on the screen in all possible ways of X-citement, Gustavo Vinagre is the leading character. According to his own words, when he was doing a crowd-funding campaign, his motivation was finding his childhood neighborhood in São Paulo in the process of becoming a new Dubai, while he was in Cuba studying cinema. He wanted to reflect on those alterations, and the shock it had on all his childhood friends, using sex, the main weapon against bourgeoisie”, as Pier Paolo Pasolini once proposed (long ago, in “Teorema”, in the emblematic 1968). But Gustavo had a different reference: he wanted to do porno-terrorism “a la Bruce La Bruce”. So we see that he is terribly bored, he walks around with his young boy lover, rims him, makes love to his lover’s father, seduces a construction worker who screws him, and so on, from here to there, and there to here, be sure to bring your umbrella… It is a wet sexual trip, little less, and a brave one indeed, while a languid, pretty kid is trying to commit suicide, and another one (also pretty) tells us the plot of “The Texas Chain Saw Massacre”, “Scream”, and I don’t know what else. These two guys’ dilemmas seem more interesting than Gustavo’s crisis, but he pays more attention to his sex adventures in the new Dubai. It is not boring. We, voyeurs us, watch, watch and watch, and cannot take our eyes from the rectangle and all those curves. But apart from Gustavo himself, I don’t know if in the end you will get much from this. Probably yes. But what there is no doubt whatsoever about is that the whole gang, hunks, queers, LGTBs, all and sundry will get a lot of Gustavo Vinagre. 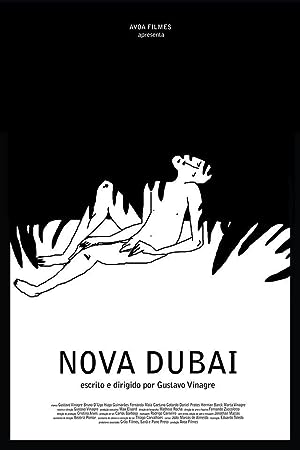 Nova Dubai (2014)
55 min|Drama, History|23 Apr 2015
5.0Rating: 5.0 / 10 from 113 users
In a middle class neighborhood in a city in the countryside of Brazil, the real estate speculation is a menace to the affective memory of a group of friends. Their answer to this imminent …
Director: Gustavo Vinagre
Creator: Gustavo Vinagre (story), Gustavo Vinagre
Actors: Gustavo Vinagre, Bruno D'Ugo, Hugo Guimarães, Fernando Maia