Set in Italy, the film follows the lives and interactions of two boys/men, one born a bastard of peasant stock (Depardieu), the other born to a land owner (de Niro). The drama spans from 1900 to about 1945, and focuses mainly on the rise of Fascism and the peasants’ eventual reaction by supporting Communism, and how these events shape the destinies of the two main characters.

Novecento is the Gone With The Wind of Italian cinema with enough American stars and one French one to make sure of its international market. It has the epic feel of Gone With The Wind, you can also compare it to any number of films based on Edna Ferber novels. It begins at the beginning of the 20th century in Northern Italy with the birth of two boys on the same day. One is the grandson of the local Padrone, Burt Lancaster who grows up to be Robert DeNiro. The second is the illegitimate grandson of the head man among the workers on Lancaster’s estate, Sterling Hayden and the boy grows up to be Gerard Depardieu. This had to be Northern Italy or no one would have believed Gerard’s baby blues in Sicily or Calabria.

Despite the difference in class which Americans have trouble comprehending, but as Marlon Brando said in The Young Lions mean a great deal in Europe, the boys grow up to be friends. But it’s not only politics that pushes them apart, it’s the love of Dominique Sanda. She marries DeNiro, but he can’t believe she’s not get a yen for Depardieu.

Like Gone With The Wind with the Civil War and Reconstruction, Novecento is set in the period from 1900 to 1945 which were tumultuous years for Italy. Until 1870 Italy was a geographical expression not a country, until the Pope surrendered sovereignty of the Papal States. Like Germany which also united at the same time it now wanted to be recognized as a leading power, Italy even got into the colonial game in Africa. Unlike every other European power it met defeat at Adowa when trying to takeover Ethiopia. That too had a major impact on the Italian psyche, something Bernard Bertolucci curiously enough did not mention.

He concentrated on the age old grievances of peasants against the landlords and the internal problems it was bringing Italy. Abusive landlords and the peasants they controlled, a feudal system that was badly out of date in the industrial age which came to Italy, a bit late, but there in time to throw a lot of peasants off the land and make socialists and communists of them. The gentry, the growing middle class, the church responded in kind with its own counterrevolution, Fascism.

In fact the film’s villain is Donald Sutherland as a Fascist overseer that DeNiro hires and who basically takes over running the estate and politics of the locality. This is one of Sutherland’s best screen performances, he will chill you to the bone with his cruelty and arrogance. He’s essentially a thug who’s been given political power.

Running a close second is Laura Betti as DeNiro’s sister who marries Sutherland and becomes a true believer in the Fascist cause. At least she sees the peasant discontent and believes Fascism will protect her privileged position.

The original running time of this epic is over five hours and really should have been a mini-series. Maybe in that format we’ll see the director’s cut some day. It’s still a powerful piece of film telling the epic story of a country for almost half a century. 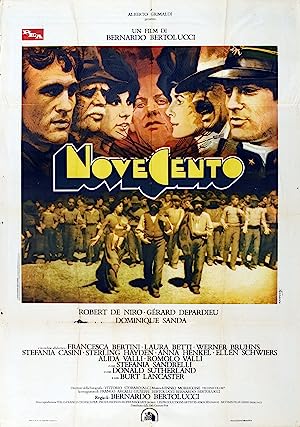