A group of people try to flee from a dictatorship government.

A man returns to the city of his life, where various military and paramilitary forces are vying to fill a power vacuum, shortly before the city falls to one General Fraga. The night that this inhabits this film is literal and moral, the city’s inhabitants that we run into are either foot soldiers blindly following power and ego tripping on banal abuses, politicos letting lose their inner monsters after abandoning the window dressing of their ideals, or the general populace seeking the oblivion of sex, music and alcohol.

It was not hard for me to feel a contemporary resonance. Especially today rather than 2008 when the film was made, as Europe now has so many refugees. There is an almost indescribable darkness to modern life, and if the ill will of the individual was the substance of night, it would surely blot out the sun and leave us in a perpetual night. In the film the head of the secret police makes a church his office, and whilst much has been made of the failings of the church, nothing entered the gap left in the teaching of moral examples after its demise and disgrace. It was replaced by “reality TV”. Now when people find happiness they cup it in their hands like a flame in the wind, they glut on it in private like vampires. Better that then let anyone else stick their fingers in it. There is no longer such a thing as unalloyed public jouissance.

Werner Schroeter was not a “good boy” he did not stay within the bounds of “good taste” and thus his film didn’t really make it out of related countries (Portugal where it was filmed, France in the language of which it is filmed, and the Germany of the director). To my knowledge it has never been screened in the English-language world. There are scenes of the graphic aftermath of rape and torture, and some uncomfortable hints of pederasty, and this is outside of “good taste”, but inside of people. Schroeter is a tender filmmaker so do not mistake this film for exploitation. The protagonist of This Night / Nuit de Chien, is a man, and only that, people try hard to associate him with various roles he has played, offices he has held and skills he possesses, but none of that is who he is, hence why he ignores any related questions. Only when we shed our vanities do we really become human.

In parts of the movie Charles Ives’ The Unanswered Question is played, perhaps the most brilliant peace of classical music there is, I find it absolutely devastating every time I hear it. This movie is devastating as well and I hope more people find out about it, the German DVD of the film, Diese Nacht, has English subtitles so there is nothing stopping anglophones finding out about the movie. 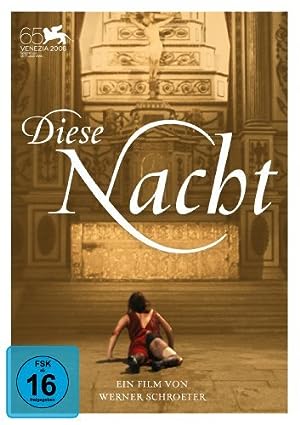