One Hundred Days After Childhood 1975 with English Subtitles

Girl – “femme fatal” in age of about 14 – Ergolina (sumptuous young actress Tatyana Drubich) is absolutely convincing though everything is quite virgin. The hero of the movie – youth 14 years old too – try to understand the nature of Love on the background of real nature as scene is summer camp (“Soviet pioneer’s camp” – like scout camp). The action is slow similar to Russian summer itself, but it is advantage here: the psychological effect (empathy) is accelerated and is picked up. Film contains “chapters”: from “Sunstroke” in the beginning towards “Education of Feeling” in the end and all these are metaphors of the Love. 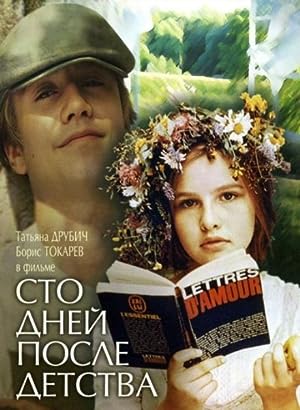 One Hundred Days After Childhood (1975)
94 min|Drama, Romance|01 Dec 1975
7.9Rating: 7.9 / 10 from 550 users
A group of Russian teenagers spend their summer at a summer camp. Mitia falls in love and gets so occupied with his own problems that he forgets the others.
Director: Sergey Solovev
Creator: Aleksandr Aleksandrov, Sergey Solovev
Actors: Boris Tokarev, Tatyana Drubich, Irina Malysheva, Yuri Agilin