A gray winter sky hangs over lonely city streets, rotted oil derricks, and abandoned factories. This is Oil City, Pennsylvania, a fading industrial town in the heart of the American rust belt. It is the sort of town that Barrack Obama had in mind when he made his infamous comments about bitter small town residents clinging to their guns and religion as they watch the rest of the world pass them by. The peace

and quiet is shattered when the filmmaker, Oil City native Joe Wilson, places the announcement of his wedding to another man in the local paper. The announcement catches the eye of Kathy Springer, a local woman whose teenage son, CJ, is being brutally tormented at school because he is gay. Ignored by the school authorities and with no where else to turn, she seeks help from Wilson and they begin a difficult but ultimately successful struggle to take on the school authorities who made every day “eight hours of pure hell” for CJ. The announcement has a very different effect on Diane Gramley, head of the local chapter of the ultra-conservative American Family Association. Infuriated by the prospect of the “homosexual agenda” invading her little town, she issues an action alert calling on townspeople to denounce same sex marriage and all other forms of “perversion”. Over the next four years Wilson navigates the ins and outs of being different in a conservative small town. He makes an unexpected friendship with an evangelical pastor that demonstrates the understanding that can develop when people on different sides of an issue lay down their swords and get to know one another. And he helps a lesbian couple renovate an historical downtown theatre that could catalyze the town’s economic revitalization – if the community will accept them. The greatest change occurs in Wilson himself as he realizes that while maverick acts such as the publication of his wedding announcement can create a splash, creating lasting change in small towns takes the courage and ongoing commitment of local folks to speak out and live openly.

First, it is said that the harassment issue is not new, and it is not, yet it sounds as a nothing-new-under-the-sun drawback for the documentary; the fact that the boy’s case is exemplary in his not being at all effeminate – exemplary, that is in vivifying the way we should think again what we see.

What I mean is this: take whatever film you will with man to man love, and tell me no matter how male the male element acts, to put it that way, homosexuality is usually depicted as a right to be admonished or not. But what CJ’s case exemplifies is that all the babbling against homosexuality as sin boils down to reproduction: if you publicly act like like a, well, truly male male, who, literally, cares what you do between the sheets? What is missing from the covering of the facts is why CJ came out in the first place. Was it the usual “what bitch do you f**k” harassment, or like things one listens at high school? For the sake of privacy we won’t know, but we can ponder upon it, that is what truly are the reasons of spelling out “who we are,” that is our sexual identity.

That contrasts well with the female couple, that is their sexual identity as debate is irrelevant in terms of renovating a culturally important location, since that is what they do, significantly, for most of the film. Who we are is also what we offer to the community.

But of course this is something you know. Some pray for it, some pray against it.

I liked the nerve CJ brought to the film, I liked, well kind of, the chill that whatshername zealous woman allowed us to witness in the workings of gooood Christians, but the documentary relied a bit too much on them, I’d like to see some nerve from the makers, that is some accent on the emerging friendship between the pastor and the director as a true redeeming factor. That would sustain the tension and the care between leaving your hometown and staying there, as the director himself says towards the end. 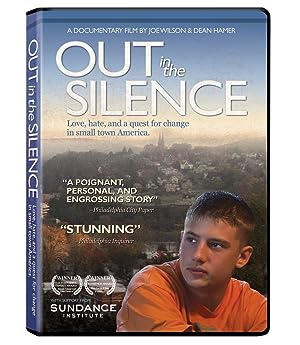 Out in the Silence (2009)
56 min|Documentary, Comedy, Family|05 Aug 2009
5.0Rating: 5.0 / 10 from 443 users
The announcement of filmmaker Joe Wilson's wedding to another man ignites a firestorm of controversy in his small hometown and a plea for help from the mother of a gay teen being tormented at school.
Director: Dean Hamer(co-director), Joe Wilson(co-director)
Actors: C.J. Bills, Diane Granley, Linda Henderson, Roxanne Hitchcock