A film director reflects on the choices he’s made in life as past and present come crashing down around him.

The story about the artistic crisis and depression. Once the noise of the glory goes away, there’s nothing but emptiness and pain inside. Almodóvar has created this autobiographical masterpiece during his darkest and the most lonely moments in his life. It’s different from everything that the genius had shared with the world before. Feeling of loneliness and pain in every scene, that makes a glory so unimportant and empty, when you have no one to share it with. The director made the audience hold the breath while he was speaking and sharing his most intimate secrets, his memories and regrets about the past.

Endless respect for Almodóvar for making this autobiographical movie so personal and sincere. 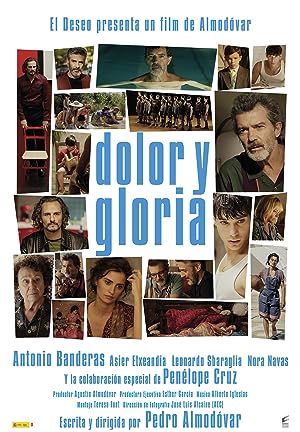 Pain and Glory (2019)
113 min|Drama|04 Oct 2019
7.8Rating: 7.8 / 10 from 3,601 users
A film director reflects on the choices he's made in life as past and present come crashing down around him.
Director: Pedro Almodóvar
Creator: Pedro Almodóvar
Actors: Penélope Cruz, Antonio Banderas, Leonardo Sbaraglia, Asier Etxeandia

Be the first to review “Pain and Glory 2019” Cancel reply