Darryl Brandt fails as family father due to alcohol abuse rendering him somewhat mean and utterly lazy. Without proper plan or consulting the kids, wife Lynn sneaks out for good on Christmas. She takes a measly waitress job, model son must rebuild his life and still tries to be a substitute father for spoiled little sister Sara. Thomas get picked beyond newbie-hazing at in high-school when the cool kids find out his family is dead-poor, jocks top-dog Vic West even makes it a personal vendetta when AAs-‘nerd’ Thomas tries out for ‘his’ basketball team and is at least as good at that too. Kevin Morrell, who wrestles with a business in trouble and a problem twins pregnancy, seeks solace by returning to pastor and team coach Graham Cody’s big brother program and becomes Thomas’s mentor. At Christmas, things get complicated around the Salvation Army’s Paper Angesl program to anonymously fulfill poor kids’ wishes..

Paper Angels follows two families who are both struggling. A family who have fled their home thanks to an alcoholic husband/father and a young couple struggling for money whilst awaiting the birth of their first children.

Whilst there is nothing here that elevates this above the ordinary it is still a heartwarming story. The plot is as predictable as most Christmas movies. There are some decent performances especially from Matthew Settle, Rustin Gresiuk and Josie Bissett.

Yes you can say it’s a bit too sickly sweet but it does exactly what its supposed too. Its downfall is that in a crowded marketplace these type of films really need something a bit different to live in the memory for longer than a few minutes. On that count this one maybe falls a bit flat.

This is a decent if undemanding Christmas TV movie that fans of the genre should enjoy. 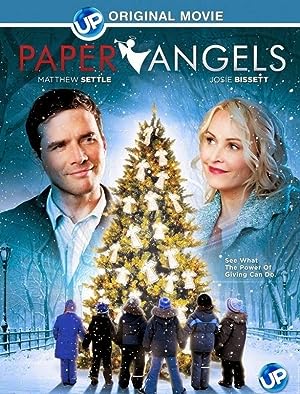 Be the first to review “Paper Angels 2014” Cancel reply