Ivan, a 14-year old boy, lives with his uncle Jaime, a mediocre dealer of used car parts. Both of them dream with a better life and are stashing away their money in order to emigrate ilegally to Chicago shortly. When Jaime realizes that he needs much more money than he expected in order to pay the “Coyote” that will help them cross the border, he decides to introduce his nephew into the world of car-part theft. Ivan learns quickly the know-how of his new trade and convinces Efrain, his best friend, to help him. The kids enjoy themselves together and carry out Jaime’s orders skilfully until Ivan realizes that his uncle’s intentions for the trip have changed since they first made their plans.

This is a swiftly paced yet thought provoking film in the same genre perhaps as, but no copy of, Certi Bambini, and whose characters are less wild and with more focus on just two individuals, Ivan and his best friend Efrain, and their relationships with Ivan’s uncle and Efrain’s mother.

For me the main theme was the exploitation of youth by adults in a tough world. If I was going to stage a mini festival on the theme it would include this film, Certi Bambini and If… by Lindsay Anderson. In all these films young people are growing up into worlds they had no making of, are suffering, don’t accept their situations, and deal with them in very different ways. There is something universal in the character of Ivan that makes him represent Everyboy. Perhaps it’s a bit pretentious of me to venture it, but from what I’ve read, and from hearing him on the radio I think Lindsay Anderson would have respected this film; it has a great feeling of humanity. Three countries, two eras, one related theme.

I could imagine the used car parts store near the beginning as some famous modern artist’s ‘installation’, lovingly recreated for the Turner Prize at Tate Britain. Fifty years down the line when the internal combustion engine is history these scenes will be as enchanting as horses and carriages in New York at the beginning of the 20th century.

But this is Mexico, by its richer northern neighbour which provides the catalyst for the action. Jaime wants to follow the holy grail of a better life in the USA, which becomes an obsession. As a 56 year old viewer in the UK it made me pause for thought. Would I want to be 14 or 16 now, whether in Mexico or UK? How much do we care for our young people, and how much do we use and exploit them? This film made me consider the distinctions between ‘wealth’, ‘value’ and ‘quality of life’.

I was so drawn into the story that I didn’t notice the acting, which in itself suggests it was natural and excellent. Apparently Emery Eduardo Granados (Ivan) only had any acting training after he was selected. The editing did not follow what I assume is the modern Hollywood or UK television school convention of attention-deficit standard five seconds per shot, but was appropriate to the scenes, which suggests that Mexican film schools and the film industry have a maturity and confidence to forge their own path. For the director’s first feature film, this is magnificent; balanced, gripping and moving, with great photography, concise editing and superb soundtrack.

This is a very personal perspective, but I would be surprised if it didn’t win a number of prizes. Anyway, go and see it, and complete a variation on this well known quotation: ‘Hell hath no fury…’. It doesn’t end ‘like a woman scorned’, 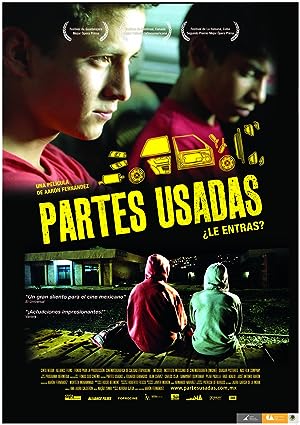