In stifling Edwardian London, Wendy Darling mesmerizes her brothers every night with bedtime tales of swordplay, swashbuckling, and the fearsome Captain Hook. But the children become the heroes of an even greater story, when Peter Pan flies into their nursery one night and leads them over moonlit rooftops through a galaxy of stars and to the lush jungles of Neverland. Wendy and her brothers join Peter and the Lost Boys in an exhilarating life–free of grown-up rules–while also facing the inevitable showdown with Hook and his bloodthirsty pirates.

When I was very young, the first version of Peter Pan I saw was the annual televised production of the Broadway Musical starring Mary Martin. It was delightful in its own limited way because after all, when Mary as Peter took to the skies you could definitely see the wires. Not to mention that Peter’s shadow looked suspiciously like female hosiery sewn together in the shape of a boy. Some years later, when it was first released on video, I finally was able to enjoy the animated Disney version of J.M. Barrie’s classic story. The songs, the animation, the characters were all first rate. Later, I caught a special showing of the Broadway Peter Pan again, this time with Cathy Rigby filling the shoes of Mary Martin. She was full of spunk and energy, and certainly had the physical frame for the role but you could still see the wires. Then Stephen Spielberg tried his hand at it, bringing us Robin Williams as a grown up Peter Pan, Dustin Hoffman as Captain Hook and even Julia Roberts as Tinkerbelle. Spielberg called his film Hook, and it’s the first time that character was ever given star billing. I like Julia Roberts, but the beam of light used for Tinkerbelle in the Broadway production gave a better performance. Of course, being a Spielberg film you couldn’t see the wires, but surprisingly Spielberg somehow forgot to make his film either interesting or magical. I’d rather have had the magic and seen the wires. The question is, just how many versions of the story does one need? Please don’t despair, as it turns out, the latest may just be the greatest of them all.

In late 2003, Director P.J. Hogan brought to the screen his vision of the boy who would never grow up and having just viewed it on DVD, I can proclaim with all honesty that it shall forever be the definitive version of Peter Pan. Well, at least for me it will be. Through the spectacular use of CGI, Hogan brings us a wondrous and beautiful Neverland never before realized on film. From the opening scenes in London and the flight to Neverland, to the snow encased ship of Captain Hook and his Pirates, each scene is rendered in illustrious detail. In one of the more humorous bits in the film when Peter loses his shadow, the shadow takes on a life of its own and it sure isn’t unused panty hose. When Peter Pan flies, he does so unimpeded by any laws of gravity, twirling, bouncing, and floating, in a whimsical way that not unlike Superman, will convince you that with the help of good thoughts and fairy dust, a boy can indeed fly. With each movement, Tinkerbelle emits a shining sparkling cloud of fairy dust that fills the screen like a thousand Independence Day Sparklers. When Peter, Wendy, John, and Michael first arrive in Neverland, they land on puffy pinkish clouds, which are quickly bombarded by Captain Hook and his cannons. In one of the most compelling and touching scenes in the film, Peter and Wendy are witness to a fairy dance, and then take to the skies themselves in an airborne ballet. When Pan takes flight to engage in swordplay with Hook and his pirates the scenes are nothing short of amazing. These are just a few of the many magical, charming, and energizing moments throughout Peter Pan.

As for the story, it pretty much sticks to previous incarnations we’ve seen in the books, films, and on Broadway. Wendy tells stories, Pan listens and loses his shadow one night, the dog Nana makes a mess of things a few times, Papa tells Wendy she has to grow up, Pan comes back to retrieve said shadow and off we go!

There is however, something inherently different about the relationship between Pan and Wendy than anything previously seen. We are made well aware of the fact that Wendy stands on the threshold of womanhood, and all indications are that the process has indeed begun. Peter, on the other hand, had run away from home with Tinkerbelle, before the rites of passage from boyhood to manhood had commenced. It is well within Wendy’s ability to love, whereas the concept of true love is a foreign concept for Peter. He cannot love, and will not love, and is firm in his resolve to stay a boy forever. It sets up a much more tense conflict between Wendy and Peter and adds an emotional depth to the story never before realized.

Much of the success of Peter Pan also has to go to the young actors portraying Peter and Wendy. Jeremy Sumpter, who shined in Bill Paxton’s haunting film Frailty, will make you forget any previous portrayal. For most of the film he is as he should be, the carefree rascal who sees fighting Hook and his crew as the ultimate in playground merriment. Late in the film, as he discovers the darker side of his emotions, he handles the transition as well if not better than many adult actors.

For Wendy, Hogan chose English Actress Rachael Hurd-Wood. As far as I can discover, this is her first film role of any kind, yet one would hardly believe that would be possible from watching this film. When she discovers she is on the verge of entering womanhood, she is able to portray both the fear and loathing of the prospect, but yet she depicts a wide eyed curiosity of what is to take place. Later, her anger and frustration in dealing with Peter’s vow of perpetual childhood, has the same believability of someone twice her age dealing with the same conflicting feelings.

Most of the adult actors are no slouches either. Jason Isaacs does a duo role as both Mr. Darling and Captain Hook. How good is he? I didn’t realize he was playing both roles until referencing the credits on IMDb. As Mr. Darling, the timid banker, he reminded me a lot of David Tomlinson’s Mr. Banks in Mary Poppins. His Hook is as dastardly a hook that has ever taken the screen. Let’s just say that when this Hook does away with someone, they pretty much stay dead and you won’t see that kind of ruthless in the Disney animated film. Olivia Williams as Mrs. Darling is perhaps the weakest link in the film. She seems not to be able to portray the deep sadness that comes when one’s children are missing, and likewise her joy at their return home is equally unimpressive. She is clearly overshadowed by Lynn Redgrave as Aunt Millicent.

And what about Tinkerbelle? I certainly can’t leave her out. She is played with a lot of panache by an actress named Ludivine Sagnier. She does it with a lot of spunk, a little sass, and a ton of energy. She will quickly make you completely forget the fact that Julia Roberts made a mockery of the same role in Spielberg’s Hook.

And most importantly there’s the biggest surprise of all. Having seen the trailer several times before the film’s release last years, I was under the assumption that as it always seems to be the case these days, most of the really good stuff was shown in those few minutes of advertising. I couldn’t have been more wrong. Let’s just say that if you saw the previews in the theater or on the internet, what you saw is just the tip of the iceberg of the discoveries waiting for you within this film.

One may come to the conclusion that perhaps I am going overboard in my praise. Yet, whether you are young or just young at heart, or wish you could fly away from your troubles to the wonderful place called Neverland, there is something in Peter Pan for even the most cynical film-goer. For an hour and fifty three minutes, it certainly made me feel younger than my years, and when a film does that I have no choice but to give it my grade and it’s an A sprinkled with a healthy dose of fairy dust. 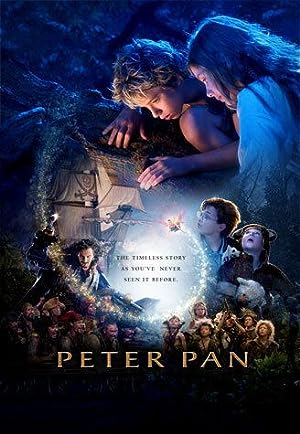