The year is 1985. Rad Miracle is a shy 13-year-old white kid who’s obsessed with two things: ping pong and hip hop. During his family’s annual summer vacation to Ocean City, Maryland, Rad makes a new best friend, experiences his first real crush, becomes the target of rich, racist local bullies, and finds an unexpected mentor in his outcast next-door neighbor. Ping Pong Summer is about that time in your life when you’re treated like an alien by everyone around you, even though you know deep down you’re as funky fresh as it gets.

This has to be one of the strangest movies I’ve attempted to watch in a long time. I thought the acting would be better with the cast members present, such as Sarandon and Hannah, but they aren’t on screen enough to improve the movie. Growing up in the 80’s myself the nostalgia factor was definitely there. When Rad orders a suicide…yep I remember drinking those gross concoctions, lol. The movie had promise, but was more like a balloon with its air let out. If you want to watch an 80’s nostalgia movie about an outcast go with The Karate Kid. Or if you want to watch a good outcast movie watch The Way, Way Back. Stay away from this stinker. 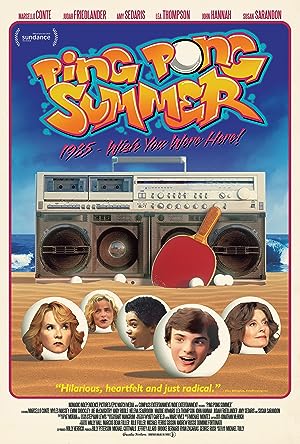 Be the first to review “Ping Pong Summer 2014” Cancel reply