A deaf teenager enters a specialized boarding school where, to survive, he becomes part of a wild organization – the tribe. His love for one of the concubines will unwillingly lead him to break all the unwritten rules within the Tribe’s hierarchy.

he Tribe is one of the most unsettling films of the year. It is set at a boarding school for the deaf in Kiev, where anarchy prevails. There are no words, subtitles, or even a score. The hearing viewer is left to interpret the violent chaos without auditory clues, presenting a unique challenge in understanding the narrative and the motivations of the characters. We are left to confusedly construe scenarios by their actions, and as such, are provided some insight into the helpless isolation of the deaf.

As a film, The Tribe may be interpreted in various ways: as a political allegory for the Ukraine, as a discourse on communication through violence, as an allegory to the impotence experienced by minority groups, or as an exploration of enactivism in film. Regardless, there are scenes that are shockingly disturbing, and the direction is unflinching. My only conclusion is that I’m sorry deaf people, but I don’t trust you anymore. 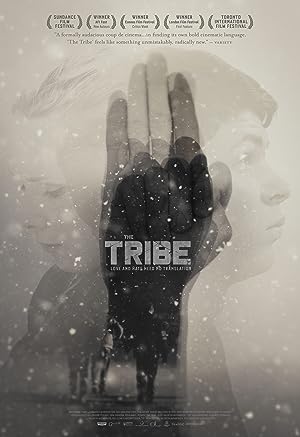 The Tribe (2014)
126 min|Crime, Drama|11 Sep 2014
7.1Rating: 7.1 / 10 from 9,269 users
A deaf boy joins a boarding school for similar children. Confronted by the violent and criminal antics of some of the other boys and girls, he struggles to conform and join the 'tribe'.
Director: Myroslav Slaboshpytskyi
Creator: Myroslav Slaboshpytskyi
Actors: Hryhoriy Fesenko, Yana Novikova, Rosa Babiy, Oleksandr Dsiadevych

Be the first to review “Plemya 2014” Cancel reply