Norah Benson, an affluent socialite living in the upper east side of New York, seems to be living the perfect life as a divorced mother of two. After her mothers suicide, she becomes a mother figure in the close relationship she has with her younger brother Joel Delany. However, Joel begins to a act very unusually: he tries to attack a man, has to be restrained to a mental asylum, and begins to loose his usual free-spirited kindness in exchange for a turbulent personality. After witnessing the acts of her brother and finally breaking down the shield of her affluence and naivety, Norah seeks the help of a spiritismo who will attempt to exorcise the spirit of a murderer they believe to be possessing Joel. But before they can attempt to help her, Norah’s brother quickly turns on her, threatening her own life and the lives of her children.

I first saw this film back in 1972 and it scared the living daylights out of me. Every time I went in the bathroom after that, I half expected to see a head hanging from the showhead… If you like to be scared in an intelligent way, this is a must see!

All of the characters are believeable and the direction is about as good as it gets. Art direction, costumes, and setwork were all very good, especially considering the budget they had to work with. The level of suspense is incredible. And the conclusion will leave you wondering.

Find this movie on Video, get yourself something to hide behind (you might need it), and enjoy! 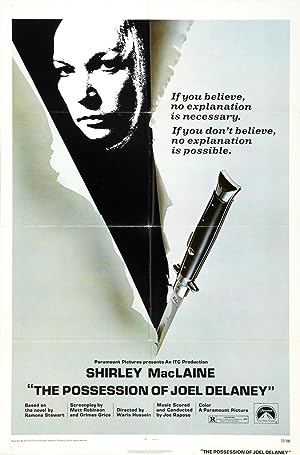 7 reviews for Possession Of Joel Delaney 1972