London, 1965: Like many other youths, Jimmy hates the philistine life, especially his parents and his job in a company’s mailing division. Only when he’s together with his friends, a ‘Mod’ clique, cruising London on his motor-scooter and hearing music such as that of ‘The Who’ and ‘The High Numbers’, does he feel free and accepted. However, it’s a flight into an illusionary world.

As the years have wore on, Quadrophenia has broken free of tagged cult classic status to emerge as a bona fide candidate for best British youth movie ever. The iconography of its main protagonist has subsided to let the core sensibility of the movies theme shine thru, this is pure and simple a perfect depiction of fallen youth during a heady time, a tale of ones ideology crumbling so sadly over the course of one weekend.

The period is captured vividly by director Franc Roddam, the stark threat of violence mixed in with the best music the 60s had to offer, serves to let the viewer feel they were there at the time, and the result is a perfect period piece. The story follows Jimmy {a tremendous Phil Daniels} on a voyage of discovery that is funny at times, yet also very sadly tragic, and for anyone who was once a teenager searching for identity and purpose…….. then this film will have maximum resonance. 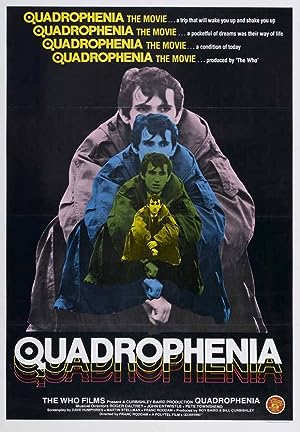 Be the first to review “Quadrophenia 1979” Cancel reply