Damien lives with his mother Marianne, a doctor, while his father is on a tour of duty abroad. He is bullied by Thomas, whose mother is ill. The boys find themselves living together when Marianne invites Thomas to come and stay with them.

This film, which in English speaking territories is released under the title Being 17, at first has all the hallmarks of your typical teenage drama. There’s two seventeen year old boys and a fair bit of animosity between them. However, where usually there’s girls or social status involved in explaining said strife, that is not the case here. In fact, there’s no particular cause for their mutual dislike at all, it’s just there. So we can imagine the horror on the one boy’s face when his mother invites the other to come live with them. It’s a generous but odd decision, considering their rivalry is there for everybody to see. It’s not the oddest choice Quand on a 17 ans makes, since the intention of this film is showing the start of a homosexual relationship. You’ll have a tough time believing this film, which takes place over a period of about 18 months, will see the relation between the boys change from mutual hatred and the occasional bit of violence to underscore that feeling, to genuine, physical affection between the pair.

Director André Téchiné – himself a gay man – is no stranger to both gay drama and teen angst. However, he felt the subject material needed the aid of writer Céline Sciamma to flesh the characters out to their best extent. Sciamma recently came off the teen drama Girlhood, which also showed rough relationships between youngsters (though all of them girls in that particular case), but despite the 37 year difference in age between herself and her director, she proves a right addition to make the teen dialogue that much more snappy and convincing. Aided by strong, not to mention daring, performances from both the young actors and their more experienced counterparts, the script goes a long way to make the unlikely transformation from one state of affairs to the other feel that much more real. Cinematography and editing do their bit as the movie moves from a snowy, cold opening to a warm and colourful close in summer, as a perfect (but rather obvious) metaphor for the change in teen moods.

Nevertheless, for the audience it’s still a far cry from hate to love (especially a type of love this deeply felt) in just under two hours time. All the ingredients are there to make us convince this is transpiring, but it just moves too fast to make us feel it with the two main characters. It has the pretension, conscious or unconscious, of an emotional epic the likes of La Vie D’Adele (better known as Blue is the Warmest Colour in many regions), but unlike that wonderful film, it just cuts the time necessary to make it equally emotionally compelling for us by a third. We cannot help but feel things are rushed, even though the movie cannot be accused of being fast paced. A change in teen nature of this magnitude simply begs more illustration for full emotional immersion, it seems. 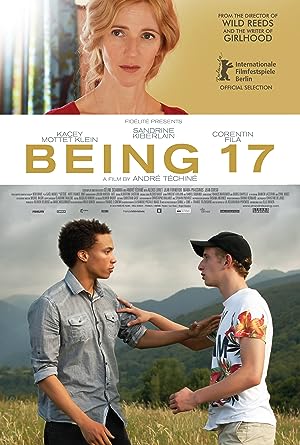 Being 17 (2016)
116 min|Drama, Romance|30 Mar 2016
7.2Rating: 7.2 / 10 from 4,476 users
Damien lives with his mother Marianne, a doctor, while his father is on a tour of duty abroad. He is bullied by Thomas, whose mother is ill. The boys find themselves living together when Marianne invites Thomas to come and stay with them.
Director: André Téchiné
Creator: Céline Sciamma (screenplay), André Téchiné (screenplay)
Actors: Sandrine Kiberlain, Kacey Mottet Klein, Corentin Fila, Alexis Loret