Glasgow, summer, 1973. Dustmen are striking; bags of garbage add to the blight of council flats and a fetid canal. Ryan, who’s about 12, drowns during a play fight with his neighbor, the jug-eared James. James runs home, a flat where he lives with his often-drunk da, his ma, and sisters, who live in hope of moving to newly-built council flats. The slice-of-life, coming-of-age story follows James as he tags along with the older lads; has a friendship with his quirky wee rodent-loving neighbor, Kenny; spends time with Margaret Anne, myopic, slightly older, the local sexual punching bag; and, has a moment or two of joy. The strike may end, but is there any way out for James?

One of the best British films of the nineties, Ratcatcher is a powerful evocation of the uncertainty and surreal nature of childhood. The film also has something to say about family relationships, death, and the toll poverty takes on people (in this case, in the Glasgow of the seventies).

Although the film could be criticised for being fairly slow-paced, I think this is entirely missing the point. The film is more about atmosphere than a linear plot, and the lingering, intriguing glimpses it offers of the young character’s life will stay in your memory like a particularly vivid dream.

I expect great things of Lynne Ramsay in the future. 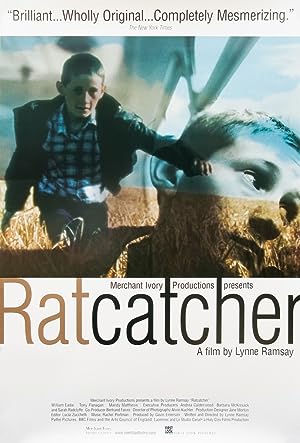