Twenty year old Lukas (Rick Okon) is a female to male (FTM) Transsexual man, taking the steps through his gender reassignment treatment. His friendship with Ine (Liv Lisa Fries), who is lesbian, is making the changes and assimilation easier. Lukas sees his romantic world open up for him as Ine introduces him to gay life in Cologne. As he becomes more and more interested in a local gay boy (Max Befort), things are getting more and more complicated. Should Lukas tell this boy who he really is?

I’ve literally just returned from the screening of this movie and it’s in my opinion one of the best titles out there dealing with the topic of transsexuality and even homosexuality.

What is important and what this movie does so well, is dealing with the topic so problematic for any transgendered person that was ever attracted to someone of the same gender; which is, how to explain to others that being attracted to a woman doesn’t make you a man – but feeling like a man does. Rick Okon does an amazing job – up to googling him I couldn’t find out whether he is male or female in real life (the perfectly done breasts confused me) and I’m ashamed that I was focusing on this so much because it just shows once more how binary-minded we are about sex and gender, even though this topic is personal to me. However – for not being transgendered himself, the actor really gets the pain, the frustration, everything that is behind the feeling of not fitting in such a basic category system.

I was also pleased with the development of other characters. In a love story, a view-point (and actually the whole life) of someone’s best friend can get easily overlooked and I like how they dealt with it. The role of Fabio was also great and the scene with the trans-girl singing was just beautiful.

Basically, if this movie would go on for another two hours, I would keep staring. 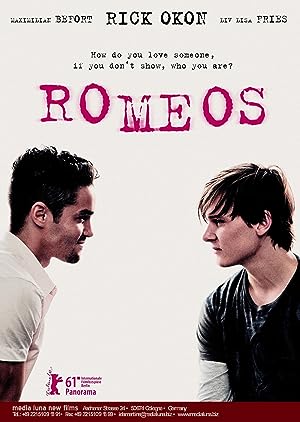 Be the first to review “Romeos 2011” Cancel reply