In a hot summer, the lives of the children are about to be changed forever when two girls are found raped and murdered. The children know who the suspect is but knowing that the adults will never believe them, they decide to keep quiet. When one of their friends sister disappear, they know they have to take the matter into their own hands.

Three troubled adults in contemporary Turin look back on the summer in the late ’70s when their childhood – and their dreams – came crashing to an end. Children of poor immigrants from Southern Italy, 13-year-old Carmine, Sandro, and Cinzia spend their summer playing with their friends in and around the abandoned warehouse of a scrap metal company. Worldly-wise and adventurous, the children form their own little society, with budding bully Carmine the stick-wielding chief, and paramours Cinzia and Sandro parental figures to the youngest. When one of their number turns up murdered, the children spring into action – at first attacking the developmentally challenged man who interrupts their play, but then, after another child disappears, coming to understand that the murderer is a well respected adult whom their parents consider beyond reproach. And when Carmine’s little sister goes missing, the children make moral choices that will scar them for life.

Valerio Mastrandrea, Stefano Accorsi, and Valeria Solarino are superb as the lost souls who, even in their 40s, have yet to find any grounding in their lives. Equally superb are Giuseppe Furlo, Giampaolo Stella, and Giulia Cocellatto as their younger selves. Filippo Timi is memorable as the local doctor whose a-Capella singing of opera arias will make your hair stand on end.

Watching Ruggine is a difficult experience. While the abuse and murder of children is kept off-screen, writer-director Daniele Gaglianone nevertheless has his camera linger, too long for the viewer’s comfort, on images of adults and children that make more than just the murderer seem like potential abusers. The English-subtitled Italian DVD is rated “T,” which is the equivalent of our “G” or “PG,” but a minimum “R” would be required here – if this deeply disturbing film ever gets released at all. 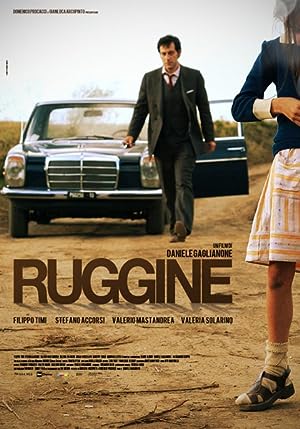 Rust (2011)
109 min|Drama|02 Sep 2011
6.0Rating: 6.0 / 10 from 370 users
In a hot summer, the lives of the children are about to be changed forever when two girls are found raped and murdered. The children know who the suspect is but knowing that the adults will…
Director: Daniele Gaglianone
Creator: Stefano Massaron (novel), Daniele Gaglianone (screenplay), Giaime Alonge (screenplay), Alessandro Scippa (screenplay)
Actors: Filippo Timi, Stefano Accorsi, Valerio Mastandrea, Valeria Solarino

3 reviews for Ruggine 2011 with English Subtitles