The Popes are a family who haven’t been able to use their real identity for years. In the late sixties, the parents set a weapons lab afire in an effort to hinder the government’s Vietnam war campaign. Ever since then, the Popes have been on the run with the authorities never far behind. Today, their eldest son wants a life of his own although he is aware that would mean that his parents would either get caught or he will never see them again.

Possibly the finest and most underappreciated film by Sidney Lumet, this movie has moments which grab you by the throat — they are so powerful. The cast, which is outstanding (Judd Hirsch, Christine Lahti, and River Phoenix in particular), is part of the reason for its power. The characters are totally convincing. The young man played by River Phoenix is someone we must sympathize with: his dilemma is a lifelong choice between never seeing his loved ones again or continuing to grow as a very talented pianist. The choice is agonizing, and the ending is sure to bring tears to many eyes of people who are part of a close-knit family. One scene is particularly powerful and makes me tear up every time I watch it: The luncheon meeting between Annie, the mother (Christine Lahti) and her father, played by Steven Hill. The dialog during this scene is so convincing, and the acting is perfect. But River Phoenix is the main reason to see this beautiful film, and this simply underscores the tragedy of his death at an early age. He had already proved he was a talent of considerable promise with in Stand By Me and in Mosquito Coast. I fully recommend this film to all thinking people with feelings about the inevitable conflict between family and individuality. This is a small film — what I call “a little gem” — most of which are small budget films with great acting and centered around the subjects of families and their values. Also see Crossing Delancey, another “little gem”. 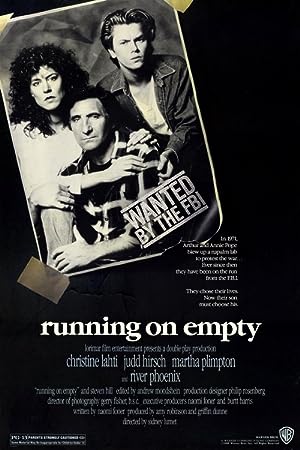 Be the first to review “Running on Empty 1988” Cancel reply