In World War II Italy, four fascist libertines round up nine adolescent boys and girls and subject them to one hundred and twenty days of physical, mental and sexual torture.

I’m going to keep this short. If you want to see Salo simply to see what all the hype is about, keep your $600. Or rent it. If you can find it. I happen to own the Criterion release that is now being ripped and sold on Ebay for $400-600 bucks. Is it worth it? No. Is any film? No. Is it an excellent film? Absolutely.

Try not to think of Pasolini’s masterpiece as a shock-for-shock’s sake project and you’ll truly understand the horror that is Salo. While the depiction of violence, sodomy, corpophagia, eye-gouging, scalping, nipple burning with candles, etc. etc. is horrific it is Pasolini’s treatment of the boys and girls that is much more horrifying.

The monsters that occupy this small space of two hours, the fascists, are more human that their victims. We are given no insight into the lives of these children, while we are shown at great length the heads of state personal histories and sadistic proclivities.

Salo has stood the test of time because of it’s unflinching portrayal of human violence and idealism, and the fact that, as the Criterion collection states: “Moral redemption may be nothing but a myth.” Be warned: for many, Salo is a film not easily shaken off after a single viewing. 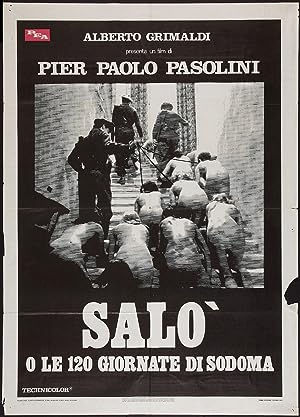