Iranian-Swedish screenwriter and director Babak Najafi’s feature film debut which he wrote, premiered In competition at the 33rd Gothenburg International Film Festival in 2010, was screened in the Generation section at the 60th Berlin International Film Festival in 2010, was shot on location in Sweden and is a Swedish production which was produced by Swedish producers Rebecka Lafrenz and Mimmi Spång. It tells the story about a 15-year-old student named Sebastian who lives in an apartment in Gothenburg, Sweden with his mother named Eva whom is working as a newspaper carrier. Sebastian is not having the time of his life at school and whilst he is constantly being bullied by his classmate and neighbour named Kenny and some other guys, Eva is assaulted at her job and both of them decides to keep their afflicting experiences to themselves out of consideration for one another.

Subtly and engagingly directed by Iranian-Swedish filmmaker Babak Najafi, this quietly paced fictional tale which is narrated mostly from the two main characters’ viewpoints, draws a tangible and reflective portrayal of a Swedish boy without a father whom is hoping to get a motor bike for his upcoming birthday and his relationship with his mother who barely has the resources to care for her beloved only child. While notable for its naturalistic milieu depictions, sterling cinematography by Swedish cinematographer Simon Pramsten and low-keyed production design by production designer Gilles Balabaud, this character-driven and narrative-driven story about a self-sufficient person who after stopping by at a quarry on his way home from school gets an idea about building a bomb, and a mother who disgraces herself for the sake of making her son happy, depicts two merging and genuinely heartrending studies of character.

This sociological, situational and incisive coming-of-age drama from the late 2000s which is set during and autumn in Sweden in the early 21st century and where a single parent is becoming more and more aware of her limitations and the child she has sole custody of is being violated and humiliated to the breaking point by bullies, is impelled and reinforced by its cogent narrative structure, substantial character development, subtle continuity, distinct realism, poignant scenes between Sebastian and Eva, use of music, the interactive and authentic acting performances by Swedish actor Sebastian Hiort af Ornås and Swedish actress Eva Molander and the fine acting performance by Swedish actor Kenny Wåhlbrink. A lyrical, atmospheric and distinctly compassionate indie which gained, among other awards, The Church Of Sweden Film Award at the 33rd Gothenburg Film Festival in 2010. 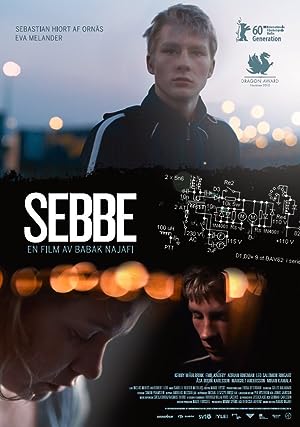