A beautiful young escort, Paul, suffers from trip-like dreams he doesn’t understand. These visions are shared by his clients, both scaring and exciting them. Paul is searching for his twin brother, whom he hasn’t seen since childhood, and hooks up with enigmatic film director John Baxter. Desired by everyone but lost to himself, Paul is persuaded to make one adult film, which will help him discover himself, and in the process find his twin. But the journey he goes on is a dark one, involving dangerous clients, an unscrupulous rival producer, and unsafe sex. In discovering his true past, Paul is in danger of destroying himself

I absolutely ADORED this film and could not disagree more with the other reviewer here. The things he found boring and monotonous, I actually think these very parts are what make the film so good. Its meant to be dark and kind of moody, i liken it (the mood) to Donnie Darko but not quite as bizarre. The dream sequences are stunning and are only repetitive to a point, which is the point i think, each time they are shown throughout the film, we are shown a little more, from different angles that reveal more while not answering questions…. it had me guessing to the very end…who is behind the mask? what happened to his brother? and is he even real? these are a few of the questions i found myself asking, hence me wanting to watch more and get more drawn in, until you are finally given the answers in a pretty awesome twist i reckon! ? I suppose it just goes to show, what some people love about a film, can be the very same thing that turns someone off (though its kinda hard not to be turned on! there’s a lot of sex scenes and nudity, but its not gratuitous). If you want to watch a gay themed movie thats different to any other so far, id say watch “seeing heaven”. I personally LOVED IT! 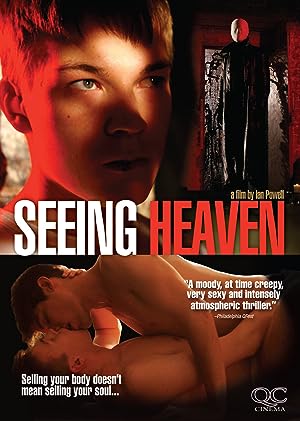 Seeing Heaven (2010)
106 min|Drama, Thriller|25 Apr 2011
3.6Rating: 3.6 / 10 from 261 users
A beautiful young escort, Paul, suffers from trip-like dreams he doesn't understand. Paul is searching for his twin brother, but the journey he goes on is a dark one. In discovering his true past, Paul is in danger of destroying himself.
Director: Ian Powell
Creator: Ian Powell (screenplay)
Actors: Alexander Bracq, Denton Lethe, Thomas Thoroe, Maximo Salvo