Natalie Becker is staying at home studying and working on an essay to meet the president while her father is away. Jeffrey Moran, a childhood friend (whom her father does not know) is having trouble with his stepfather, Jeremy, who is an immature bully, so she lets him stay with her. All sorts of trouble and misunderstandings ensue. Natalie’s best friend Polly tries to date a pro baseball player, Zoo Knudson, and is very intrusive on Natalie’s personal life, jumping to hasty conclusions. She is also ready to jump on a plane to New York to be with Zoo.

This is one of those movies that is largely forgotten nowadays. ‘Seven Minutes in Heaven’ is the only feature film that Linda Feferman ever directed and it was in competition for the Grand Jury Prize at the Sundance Film Festival 1986. It didn’t win that award but it did receive the ‘Special Jury Recognition for Youth Comedy’ at the festival that year.

Admittedly, the plot of ‘Seven Minutes in Heaven’ is average at best and typical for a comedy of the era, but it is still a decent coming-of-age movie thanks to its rather strong main cast of genuine teenage actors. Jennifer Connelly is as sweet as always and Maddie Corman is equally delightful. Byron Thames is also great in the role of the somewhat quirky guy. I wonder why he didn’t get more roles in 1980s comedies after this one. It’s nice to see Marshall Bell, an accomplished and widely recognized character actor, in a small supporting role.

By the way, ‘Seven Minutes in Heaven’ was released on DVD in 2010 as part of the Warner Archive Collection. The picture quality of the transfer used for that DVD is surprisingly good for an archival release of a rather obscure movie made in 1985. 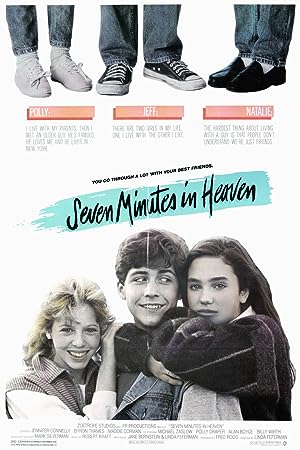