An evil Archbishop of the Catholic Church summons a demon to try and destroy the world. The summoners are killed, but the demon escapes to hunt down its needed victim. The victim soon turns out to be a child that has the potential to become a saint. After ravaging the town and turning its citizens upon themselves, the demon soon locates and captures his prey.

As a direct to video release this isn’t half bad.

Shadowbuilder is loosely based on a Bram Stoker short story. The first shadow created when God flooded the world with light is out to plunge it back into eternal darkness. I think.

This film reminded me very much of The Mummy in structure. Evil dude comes back to life drawing powers from souls he devours in the midst of an avalanche of CGI. The film relies a lot on CGI which I didn’t like at first. But if you accept it as more of a fantasy film then horror you will recognise its actually pretty well done. The demon also isn’t that bad. The garish pink monstrosity (yes it was pink) on the DVD cover led me to believe it would be a yawn inducing man mincing around in a horned rubber suit but I was pleasantly surprised. Good use too of shadow and darkness so what you see of the creature leaves most to your imagination. Just the way it should be.

Some parts of the film drag a lot and there aren’t that many great moments. But that isn’t to say there aren’t any at all. Overrall though Shadowbuilder remains pretty average but still very enjoyable if you aren’t looking for something that will blow you away. Unlike the Matrix wannabe priest with the twin 9mm’s. The film needed a lot more of Neo shooting vainly at the afro toting bad guy. 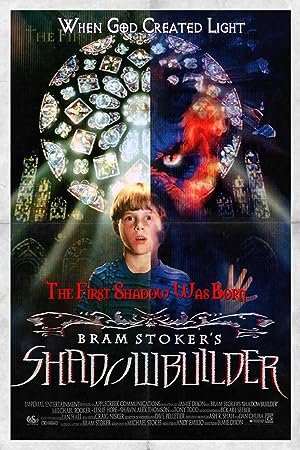 Shadow Builder (1998)
120 min|Action, Horror, Thriller|07 Feb 1998
4.9Rating: 4.9 / 10 from 1,171 users
A demon is summoned to take the soul of a young boy, who has the potential to become a saint. By doing this, he will open a doorway to Hell, and destroy the world.
Director: Jamie Dixon
Creator: Michael Stokes (screenplay), Bram Stoker (based upon the short story by)
Actors: Michael Rooker, Leslie Hope, Shawn Thompson, Andrew Jackson