We all have a superhero inside us, it just takes a bit of magic to bring it out. In Billy Batson’s case, by shouting out one word – SHAZAM. – this streetwise fourteen-year-old foster kid can turn into the grown-up superhero Shazam.

I was lucky enough to get tickets to an advance screening of this film and I was very excited, since I liked the trailers and the concept of the film. After seeing it, I’m pleased to say I really liked this film a lot.

Let’s start with saying that the acting is fantastic in this. Zachary Levi is incredible and very believable as a 14 year old in an adult body. He’s funny, energetic, charismatic, and seems like he was totally born to play this part, I would compare him to Christopher Reeve’s Superman. Even aside from Levi, the acting is great. I was a little worried about the child actors since they don’t always work, but here they were great.

I was a little worried about the character of Billy originally. Because in the trailers he seemed to be a very angsty kid, and then as Shazam it felt like a very different person. However in the film it totally works. He is an angsty kid in the beginning, but he goes through a very interesting character arch that makes both characters feel real and believeable.

And then we get to probably my favourite part of the film, the heart and great story about family. Billy Batson is a foster kid who just kind of wants to be left alone but he is forced to adjust to a foster family. It’s incredibly common for films to have a very negative portrayal of foster life, and this film refreshingly has a very positive take on it. The foster parents portrayed in this film are not abusive or negligent, but genuinely want what’s best for the kids. This entire part of the film was brilliantly done and filled with so much heart and I loved it. One specific scene stands out to me at the end of the second act that I won’t get into, but I thought it was brilliant.

My only negative with this film is the same that I have with most comic book films, the villain. However in this case it isn’t bad at all, it actually begins in a very intriguing way but there is a big gap in the characters story that bothered me a little. Mark Strong does a goon job playing the character of Dr. Sivana, and in fact the character isn’t bad, but it’s not one you’re gonna remember.

Shazam! Is a brilliant film that is a throwback to the old superhero days and a surprisingly self aware with some scenes coming off as a slight parody to me. It’s brilliantly acted, hilarious, has a very heartwarming story, and is without a doubt one of the best films in the DCEU. 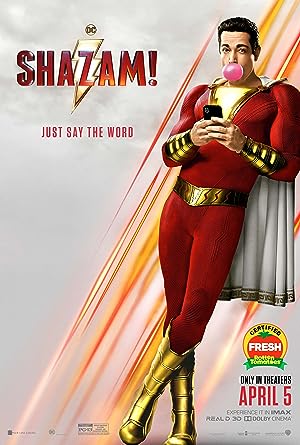 Shazam! (2019)
132 min|Action, Adventure, Comedy, Fantasy|05 Apr 2019
7.4Rating: 7.4 / 10 from 108,101 users
We all have a superhero inside us, it just takes a bit of magic to bring it out. In Billy Batson's case, by shouting out one word – SHAZAM. – this streetwise fourteen-year-old foster kid can turn into the grown-up superhero Shazam.
Director: David F. Sandberg
Creator: Henry Gayden (screenplay by), Henry Gayden (story by), Darren Lemke (story by), Bill Parker (Shazam created by), C.C. Beck (Shazam created by)
Actors: Zachary Levi, Mark Strong, Asher Angel, Jack Dylan Grazer

Be the first to review “Shazam! 2019” Cancel reply