Haakon Haakonsen didn’t want to go to sea so young, but when his father, a Norwegian sailor, comes home with a badly wounded foot in the 1850s, the Haakonsen family finances require him to enlist as ship boy aboard a British ship under Royal Navy authority. After some hazing he buckles up to learn the hard work and gets accepted by the rough crew. Then Royal Navy lieutenant John Merrick is welcomed to take charge of security on a long voyage to Sidney and Calcutta, through pirates-infested waters, but Haakon distrusts him after finding out that he packed concealed weapons; indeed Merrick secretly poisons the captain. Haakon and his guardian angel, his father’s best mate Jens, were about to feel the claw of the cat for helping a stowaway when a rock wrecks the ship. Haakon washes up an island where he finds a pirates treasure and weapons.

Shipwrecked is a tale about a young boy who finds his destiny and friends along the way. It is quite an interesting movie, very different and more thoughtful than most American movies. Stian Smestad does an excellent job as Hakon Hakonsen, and the actors who played Mary and Jens were wonderful also. This is a timeless classic with a good lesson in it. *** out of **** 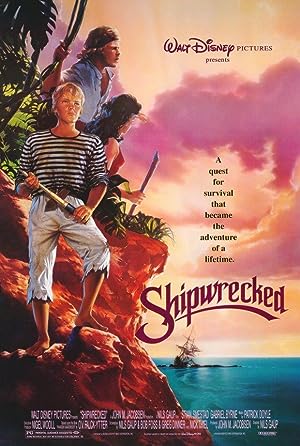 Be the first to review “Shipwrecked 1990” Cancel reply