Since childhood Edoardo has been suffering from phimosis, a penis malformation which prevents him from experiencing sexual satisfaction. Now seventeen, he starts to feel some pressure from the outside world. Apparently everyone around him talks and thinks about sex: his friend Arturo, so obsessed with losing his virginity that is wanting to pay for it, his parents, encouraging him to declare his love to Bianca, even his little sister Olivia, looking for a good partner for the family dog Teagan. Edoardo’s lack of confidence starts changing with the casual meeting of a new girl, Elisabetta, and the unexpected approach of Bianca. Forced to come out of the shadow he was hiding in, Edoardo tries first to solve his problem with clumsy strategies, finding finally the courage to face his fears.

Edoardo lives in Pisa and has been suffering since childhood from phimosis. The wellbeing of his malformed penis is of great concern for the entire family, with both his parents (Michele Crestacci and Bianca Nappi) and even his little sister Olivia (Bianca Ceravolo) participating in inspections of Edoardo’s member. Now 17, Edoardo starts to feel the pressure: his best friend Arturo (Nicola Nocchi) is obsessed with losing his virginity and endlessly fantasises about the details of the eagerly awaited moment. Edoardo wouldn’t mind having sex, especially when his best friend Bianca (Francesca Agostini) comes to Pisa for the holidays, or when he meets Elisabetta (Miriana Raschilla), a girl who sings in a band. However, his condition makes things very complicated for him.

According to the director, Short Skin has many autobiographical elements, which may explain the great love with which Chiarini presents his (protagonist’s) misadventures, but also the amazing family chemistry. Although somewhat familiar, the feature will captivate audiences with its smart mix of humour and drama, maybe even teaching a lesson or two about courage, improvisation and overcoming one’s insecurities.

As for Edoardo, not many young characters seen lately on the big screen are as endearing as this morose teenager who is as thin as a broomstick but has a huge heart beating in his chest. His actions and commentaries are governed by extraordinary common sense, even when all those around him do or say things that may hurt their loved ones. Creatini gives an impressive performance as the youngster who needs to overcome fear, pain and the unknown in order to reclaim his future.

Fiddling with an octopus, being poked at by doctors and his family, trying to have sex with a prostitute, and dealing with his sister’s obsession for finding a mate for their dog and with his parents’ marital problems, Edoardo faces many situations that challenge Creatini’s talent, but the actor always finds the right way to convey his character’s emotions. It is the greatest obstacle for the film to overcome, as Edoardo is on screen in practically every sequence, and Creatini is always convincing. He is also the perfect protagonist of one of the most beautiful sequences seen of late, an ode to youth and coming of age.

Although not without its flaws, and though it switches too abruptly from teenage comedy to family drama, Short Skin is an interesting and relevant cinematic experience. It is greatly helped along by the ensemble of actors, who give very natural performances. With the right promotion, it may have success both at festivals and in cinemas, with Chiarini’s keen eye for funny situations, and for the ups and downs experienced by the quintessential Italian family. 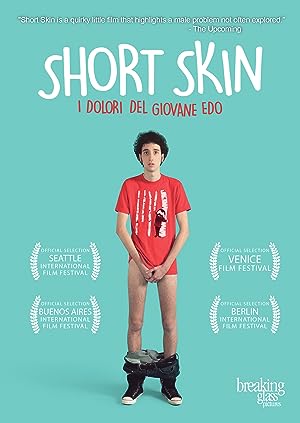