Jimmy’s best friend Sammy has died of leukemia, leaving behind one final wish: ensure his body is buried in his favorite football jersey. Jimmy and his friends, including his ex-friend Dan, his little brother Lump, and his crush Kate join the adventure of a lifetime as they spend one unforgettable night fulfilling their friend’s final request.

“When I was seven, I met my best friends. They were idiots, and I loved them for it. We did everything together. No matter what, we had each other’s backs. Nothing could change that, even when this jackass got cancer.”

A while ago I skipped the movie “Swiss Army man” because I didn’t feel like watching a movie about a farting corpse. Even though Daniel Radcliffe played this stiff character. I’m sure there was a deeper meaning behind the whole idea, but I still didn’t feel like it. When I started watching “Shovel Buddies”, without knowing what it was about anyway, I noticed this was also a flick with people running around with a death body the entire movie. And this thanks to the idiotic plan Jimmy (Alex “Ithaca” Neustaedter) wanted to fulfill at all costs, as a last tribute to his recently deceased best friend Sammy (Philip Labes). And the plan is to make sure that Sammy is being buried while wearing his American football t-shirt, instead of being cremated. That’s the quest Jimmy wants to carry out after receiving a snap chat from Sammy. That’s today’s youth. They continue to hold on to today’s gimmicks until their final breath.

I must admit that the film irritated me enormously at the beginning. Mainly by the behavior of Dan (Kian Lawley). An annoying jerk whose posturing attitude and arrogance started to get on my nerves. I was hoping someone would slap him. Especially after his bluntly rude behavior at the funeral and the tactless and sexist remarks afterwards, I actually didn’t like watching it anymore. Also the ridiculous, absurd plan was a bit too much. And I thought that policemen use a gut feeling. Sammy’s father (James C. “Coldwater” Burns) clearly didn’t. Instinctively, he had to sense what those teenagers were planning to do. Well, not him. Later on he appeared miraculously at the right time and the right place. Probably years of experience caused this.

As the film progressed, the absurdity of the film took grotesque forms. At some point I just couldn’t decide whether it was morbidly humorous or tragicomic. On the one hand there were funny moments like the image of a flabby Sammy sitting in the car. In a way that was hilarious. On the other hand, I sometimes thought it was somewhat pathetic and they made one stupid decision after another. The previous mentioned fragment with the four cheerful teenagers amusing themselves in the car while a corpse calmly sitting in their midst, was both terribly funny as embarrassing to see. They should have used “Bohamian Rhapsody” as soundtrack and it would have felt like a sort of “Wayne’s World”.

Focus on the entire picture and you’ll notice Sammy’s mother ….. The dual character of “Shovel Buddies” makes it difficult to form a proper judgment. Just like the involved characters you’ll be emotionally tossed around. The film is also stuffed with contradictions. Jimmy wants to fulfill his best friend’s last wish, but at the same time it seems that Sammy really was a manipulative brat who suddenly throws a seemingly close friendship overboard, because his sister was doing the hanky panky with that particular friend. Even Dan’s transformation from insufferable asshole into an compassionate, ordinary teenager who suddenly realizes that his behavior is intolerable, sounds a bit implausible.

The biggest plus point of the film was Kate (Bella “Blended” Thorne) with that lovely, cuddly face and those roguish, sparkling eyes. A ravishing appearance. Really that type of female beauty that breaks up real friendships. At least I added the option “Watch movies with Bella Thorne playing in it” to my to-do list. The initial idea of this film was quite original to say the least. Looking back at it, not only the burying of the corpse became a problem, but there also appeared to be a few personal issues between the characters. However, in the end these personal disputes were buried as well. Appropriate film title. Not? 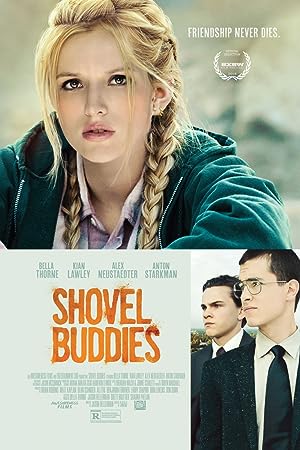 Be the first to review “Shovel Buddies 2016” Cancel reply