Teens in a holiday-camp. First love, first sex, first self-made theatre performance of “Romeo and Julliet” – quite interesting to have a look at the east-German youth in the seventies.

The film starts and ends in a teen holiday-camp. As the plot develops, it becomes most obvious that there would must be a romantic relationship between two heterosexual teens – Karoline Hinze (Kareen Schroter) and Robert (Harald Rathmann) . And such relationship must have some limitations and secrecy without question. Secret dating takes place in a secret place. Result – first sex, sacrificing of virginity. Contains Nudity? Yes, full frontal teenage nudity, nude swimming, nude kissing – everything but the “real sex” can be seen for about 5-8 minutes. A humorous sequence occurs when two little kids stole the clothes of the naked couple while they were relaxing beside the lake. The kids throw the clothes in the water that carried away the clothes leaving no chance to get them. Although, the kids later provide some peculiar clothes that the couple used to cover their bodies and return the camp.

This review is not intended to allure people who enjoy the coming of age teenage nudity. Only nudity should not be taken into account to credit the director as well as the various characters. The main two characters played well. Other consequences of the film, what can be expected to be included in a holiday camp, like the staged play of Romeo and Juliet, are beautifully presented. All the characters including adult and child actors have shown their ability to act naturally. To me this film is not in any way overrated. It is of course a beautiful combination/mixture of comedy, drama and romance which is of nice texture and tastes and digests well. Anyway, the plot may be predicted to some, if not many, as a well acted film, Sieben Sommersprossen is worthwhile to watch. 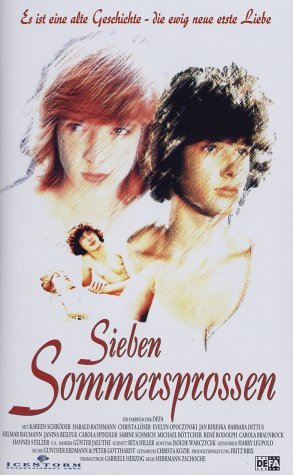