Sins of Our Youth is the story of four teenagers who accidentally murder a younger boy while shooting off assault weapons recreationally and the perilous decisions they make in the wake of the murder.

Motion Picture Rating (MPAA)
Rated R for violence, drug and alcohol use, language and some sexual content – all involving teens

I just had the opportunity of seeing this film at the Hollywood Film Festival, and first, good job for tackling a very tough subject. As someone who has a personal friend whose sibling committed suicide on a shooting range, and another friend who accidentally shot and killed his young brother, this resonates with me.

As much as I liked the film, I couldn’t help but feel like it needed some tightening in terms of the pacing and execution of the dialog. I felt some of the dialog was little forced. A little after school special. I found myself saying “would someone really say something like that?”

Lucas Till is certainly growing as an actor. It’s always great to see someone mature in their craft. This young man’s star has just begun to shine, and I hope that he makes career choices that don’t always stereotype him as the blond hunk du jour.. The rest of the cast was great as well, and I hope that we see these actors work together again sometime. 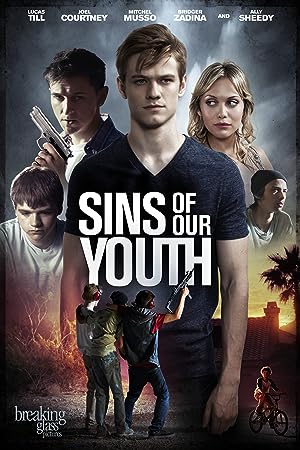 Sins of Our Youth (2014)
93 min|Drama, Thriller|31 Jul 2014
5.4Rating: 5.4 / 10 from 255 users
Sins of Our Youth is the story of four teenagers who accidentally murder a younger boy while shooting off assault weapons recreationally and the perilous decisions they make in the wake of the murder.
Director: Gary Entin
Creator: Edmund Entin
Actors: Lucas Till, Joel Courtney, Mitchel Musso, Ally Sheedy