After a horrible boating accident kills her family, Angela, a shy and sullen young girl, moves in with her eccentric aunt Martha, alongside her protective cousin Ricky. One summer, Martha sends the kids to Camp Arawak. Soon after their arrival, a series of bizarre and increasingly violent accidents begins to claim the lives of various campers. Who is the twisted individual behind these murders? The disclosure of the murderer’s identity is one of the most shocking climaxes in the history of American cinema.

Slightly disturbed and painfully shy Angela Baker (Felissa Rose) is sent away to summer camp with her foul-mouthed cousin Ricky Thomas (Jonathan Tiersten). Not long after Angela’s arrival, things start to go horribly wrong for anyone with sinister or less than honorable intentions.

This film is either loved or hated, and with good reason, but it has been embraced more and more as the years go on by fans of the horror genre. The acting is excessively cheesy, especially from Desiree Gould, but purposely so. The kills are grisly and nasty, even if not always shown on screen. When that curling iron strikes, you know the situation. And the pedophile cook? Oh man… that is pushing boundaries that even horror films dare not cross (Freddy Krueger can be a child killer, but not a child molester).

One cannot vouch for the next two sequels, which have little connection to this film, but the original stands as a true modern classic, and if you have not seen it, you are really missing out on an important piece of horror history. What could have been a ripoff of other horror slashers that take place at camp (notably “Friday the 13th”) turns out to be far different from any other title out there. And keep in mind the whole crew, more or less, had just come from “Creepshow”, so these were folks who knew what they were doing.

Writer-director Robert Hiltzik (who graduated NYU with Ang Lee) mysteriously went decades without directing again. Many of the actors also never acted again, at least for a long time. And then you have Christopher Collet, going on to make such things as “Prayer of the Rollerboys”… does that make him the biggest success from this film?

Not only does the film get better with repeated viewings (which make the humor and camp more fun), but there are actually some clever subplots that will likely be missed on the first time or two. Mel Kostic (portrayed wonderfully by the late Mike Kellin) not only is one of the best characters, but has his own story and relationship with the campers and counselors that may not be immediately evident.

The Scream Factory Blu-ray is ridiculously good and worth owning. Beyond the excellent presentation, it has three different audio commentaries, where you learn odd trivia like Felissa Rose’s husband Deron Miller meeting her as a fan, and much more. There is even a short film showing whatever happened to Judy (although it is not very good). 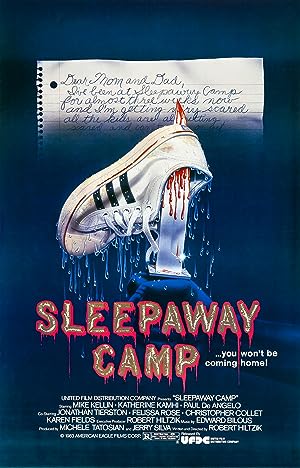 Be the first to review “Sleepaway Camp 1983” Cancel reply