Thirteen year-old city brat Ben (Brandon Tyler Russell) has done it again, and his struggling, single mother (Mira Sorvino) has had enough of him getting into mischief. Now, Ben has to choose between going down the path of juvenile hall, or spending the summer in Iowa on a farm with his estranged grandfather, Jack (Peter Fonda). The day after arriving, Ben is ready to leave. To help Ben get a friend, Jack gets him a smart farm dog from an animal shelter to keep Ben company and in line. Between the dog and a friendly neighbor (Louis Gossett, Jr.), Ben soon learns life lessons about friendship, family, and responsibility. It may take a village to raise a child, but when you only have a handful of people and a dog at your side, you have to make do with what you have. Through it all, Ben has the most memorable summer of his life.

I really feel there is something for each member of the family to enjoy in this film. I think kids, parents and grandparents could all sit down and watch this film together without fearing that they will see anything embarrassing or inappropriate. My biggest compliment to the filmmakers is that it does not talk down to the audience. I have a big problem with movies and TV shows that talk down to kids. This film respects the child star and the children that are watching. Brandon Tyler Russell gives a very truthful and honest performance that moved me. I think all the relationships in the film will appeal to one member or another in your family. It was nice to see the familiar talented faces of actors including Mira Sorvino, Louis Gossett Jr and Peter Fonda. If you are a dog lover that is an added incentive for you to watch this film! 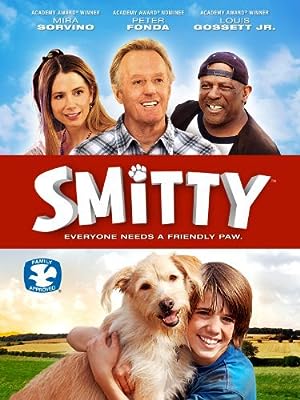 Be the first to review “Smitty 2012” Cancel reply