So auf Erden 2017 with English Subtitles

Johannes Klare is the senior, charismatic preacher of an unofficial, self-supporting fringe church in Stuttgart, aided by his devout, devoted wife Lydia and her ex-con cousin Bernd Trampe. Finding juvenile homeless busker Simon Rützel, who talked sense, by the way but refusing to be taken to hospital as ODd junkie, the childless couple take him in their home and start to think of him as a lost son. Rich parishioner Volker Reiche offers to privately finance the herd’s dream of a community center, but Johannes grows suspicious of his agenda. Discovering Simon’s homosexual nature, Johannes decides against throwing him out and must admit the exorcist is a gross bigot. In Lydia’s weekend absence, Johannes succumbs when Simon rightly guesses he suppressed his own gay lust for years, but comes clean to Lydia, where-after Simon is driven to relapse and the couple seeks to rescue their lives and vocation after the ‘mortal sin’ gets known.

For Johannes (Edgar Selge) and Lydia Klare (Franziska Walser), their belief in God comes first. Together, they lead a small free-church community in Stuttgart, successful: people listen to them, more and more join them. There are even plans to make the donated community even larger, thanks to generous donations from Volker (Peter Jordan). First of all, the couple has completely different, more urgent points to worry about. As they watch one day as the homeless street singer Simon (Jannis Niewöhner) rolls back and forth in drug cramps, they take him up with a quick decision. Together they want to help him back to the right path. But it’s not just the drugs that cause conflict. Simon’s homosexuality, too, poses great challenges for the two, since they are not at all associated with their faith.
However, this contradiction of religious conviction and sexual identity only plays a comparatively small role in So on Earth anyway. Actually, he confines himself to the fact that John and Lydia cite some Bible verses, to Simon, he was made by God like that. If it exists at all. The topic is also addressed: Simon, who experienced little divine guidance in his life, sees no right reason to believe in something. How do we know so well that the Savior Jesus existed? Could not he just be an invention? Actually, it does not really matter to him. Just as the movie does not seem to matter this topic.
What exactly So wanted on earth, remains a small mystery anyway. There is the subplot around the all-determining Volker. Another tells of a parishioner who is stealing funds. The power struggles behind the scenes, when it comes to the different interpretation of the Bible. We have Simon’s conflict with his father. The drug addiction. Homosexuality. And last but not least, Johannes, who suddenly quarrels with feelings, remembers something that he has long ago suppressed and always concealed. 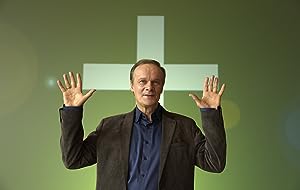