Benjamin Bentley is an openly gay 17 year-old boy in Houston, Texas, with not so many friends. He suddenly becomes infatuated with Tim Wyman, a handsome, popular – apparently straight – newcomer. When a not-so-accident brings them together, their love story begins. They start a secret relationship and build a world of their own. Something Like Summer is a coming of age story of true long-lasting love, about insecurities, social pressure, heartache and love again that spans 12 years. It’s about being true to yourself, letting your heart lead the way and discovering the strength of love.

Something like Summer the rather accomplished directing debut of David Berry from a script by Carlos Pedraza is full of surprises. What starts out as a sweet LGBT romantic coming-of-age musical actually ends up as melodrama, and a very definite tear-jerker too. In between it covers a lot of ground always trying (and succeeding most of the time) it ensure the plot with all its twists and turns never ever gets predictable.

17 year old openly gay high school student Benjamin Bentley (Grant Davis) has taken to stalking Tim (Davi Santos) the handsome school sports jock who he has a secret crush on. When through a rather clumsy set-up they actually become aware of each other, self-professed heterosexual Tim is very impressed with Ben’s singing voice, and a whole lot more as well. They start to become boyfriends strictly on the qt, mainly because Tim is not gay (!) and he doesn’t just fear their other classmates finding out about their relationship, but also his own devout Catholic parents.

The whole thing is destined to end in tears, and when it does Ben reluctantly moves on with his life which entails leaving Texas and going to College in Chicago. A couple of years later he is on a plane flying home when Jace (Ben Baur) the Flight Attendant who is a tad older, takes a shine to him, and offers him free drinks and the possibility of a date. He accepts both, and soon it seems that this time around Ben has found true love with someone who really wants to make their relationship work. In fact they really are making quite a success of it until Tim turns up again to muddy the waters.

Cue another song, some angry recriminations, and then of course some make-up sex, and then just when you think they are all are about to live happily ever after, they don’t. Cue tissues.

The very talented and completely charming cast make this adaption of Jay Bell’s best selling ‘young adult’ movie compelling enough to engage the hearts and minds also of a ‘not-so-young’ audience too. Davis in particular really shines as the confused love-lost Ben and shows too that he is a very accomplished singer, as does Ajiona Alexus who plays his best girl pal Allison. Young love is after all something to sing and dance about it, with the synergy and passion that one has at that age, totally convinced that this is the first time that anyone anywhere has experienced such joy, and such heartache too. If only.

Cue the heavy string soundtrack and maybe yet another box of Kleenex, but in the end you will be happy enough to have sat through this very delightful and entertaining wee film. 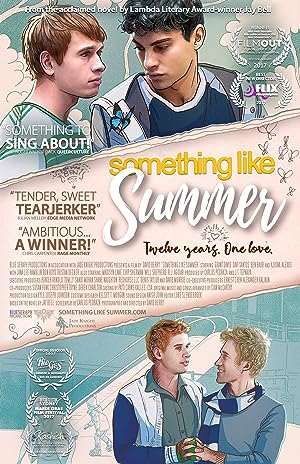