The film switches back and forth between the adventures of Pu on a summer holiday in Norrland in Sweden and and the adult Pu visiting his father who lives in an old people’s home. Little Pu spends a summer in Norrland in the 1920s with all his relatives. He and his brother get to hear the story about the watchmaker who hung himself, learns to shoot with a bow and follow his father on a bicycle trip.

While Ingmar Bergman’s son Daniel actually directed the film, Bergman himself was responsible for penning the script. The result is a beautifully crafted film on all levels that is among the best of Bergman’s later films. Daniel Bergman directs very assuredly, so much so that at times it does feel that Ingmar Bergman directed it, which I liked. The autobiographical-toned script is very personal and written with such honesty and thought as well as a complex and even tone. Sunday’s Children is also incredibly well made, the cinematography is stunning and the settings evocative. The use of sunlit country picnics and cycle rides also help to give a personal and nostalgic feel to the film, which I found quite poignant. In contrast, there are also the confrontations between Pu and his father that are incredibly dramatic and powerful. Thommy Berggren and Henrik Linnros give spot-on performances as those characters, who as always with Bergman are compelling in how realistically they are written. All in all, a remarkable film and while not among Bergman’s very finest films it is one of his better later ones and is also his most personal. 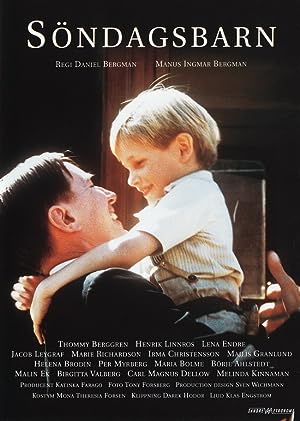 Sunday's Children (1992)
118 min|Adventure, Biography, Drama|28 Aug 1992
7.7Rating: 7.7 / 10 from 669 users
The film switches back and forth between the adventures of Pu on a summer holiday in Norrland in Sweden and and the adult Pu visiting his father who lives in an old people's home. Little Pu…
Director: Daniel Bergman
Creator: Ingmar Bergman
Actors: Thommy Berggren, Henrik Linnros, Lena Endre, Jacob Leygraf

2 reviews for Sondagsbarn 2013 with English Subtitles