In 1939 William Franklin, an anti-Franco veteran of the bloody Spanish Civil War, arrives as first-ever lay teacher in a strict Catholic Reformatory and Industrial School for wayward boys. He soon learns the academic challenge is formidable, many boys being still illiterate, but gradually earns their trust, respect, in time almost devotion, with ‘paternal’ kindness, making the layman the opposite of the cruel prefect, brother John, who frequently administers painful and humiliating punishments, even the gentle, old superior Father Damian has no authority against his disciplinary mandate from the grim bishop Conlon. Slowly even class rebel Liam Mercier is turned around, trough his gift for literature. After Franklin dares stop the sadist’s penny-weighted strap severely striking ‘sinful scum’ for a futility, the whole dorm is treated to an icy night outdoors, arms outstretched wearing only shorts. Brother Mac’s mind may mean to educate well, his flesh is too weak for celibacy, so the coy, pretty new boy becomes his latest pederastic lust-object, sworn to suffer sodomy in silence- even devoutly confessing to Father O’Driscoll his fear to have lost his innocence during painful rape costs him an endless cold shower, shivering stark-naked before his tormentor. Constructing a nativity stall for the village church allows Franklin’s class to grow close, have fun and earn praise, but after the Peters brothers cross the forbidden red lines to hug each-other on Christmas night across the wall separating the age sections, John punishes their ‘blasphemous abomination’ (?!) by publicly flogging their bare backs to bloody pulp till Franklin arrives. Still the prefect is capable of viler abuse: Liam, who sent a boy to get Franklin and received a book with dedication from that ‘communist’, privately gets the sturdy strap in the face till even secret-blackmailed brother Mac can’t watch the orgy of child-abuse any more, but now Franklin arrives so late…

I happened to get to see “Song for a Raggy Boy” at the premiere showing at Sundance…what a wonderful experience! Ms. Walsh did an excellent job of selecting the cast, which in turn, did a fabulous job of captivating the audience. Very well done! Many thanks to Ms. Walsh and Mr. Quinn for their presence at the showing, as well as the time spent answering questions. 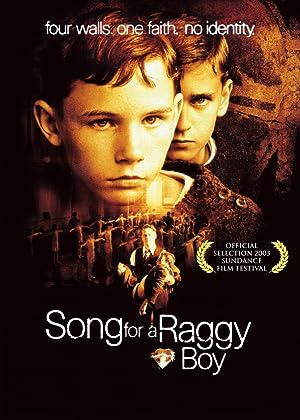 Song for a Raggy Boy (2003)
94 min|Drama, History|22 Aug 2003
7.6Rating: 7.6 / 10 from 3,402 users
"Song for a Raggy Boy" is based on the true story of a single teacher's courage to stand up against an untouchable prefect's sadistic disciplinary regime and other abuse in a Catholic Reformatory and Industrial School in 1939 Ireland.
Director: Aisling Walsh
Creator: Aisling Walsh, Kevin Byron Murphy, Patrick Galvin
Actors: Aidan Quinn, Iain Glen, Marc Warren, Dudley Sutton