Spelen of sterven 1990 with English Subtitles

In this short motion picture, schoolboy Kees is intelligent, introvert and sensitive, but gets ridiculed verbally and physically at an all-boys school by mindlessly cocky class mates and even insensitive teachers, especially in gym, where his physical weakness is mercilessly abused to make him a defenseless laughing stock in front of his smirking peers. His awakening sexual interest goes to boys, and in particular to Charel, a beautiful athletic classmate who probably feels an undetermined interest but would never risk admitting (possibly not even to himself) having any gay or bi appreciation, least of all for a ‘sissy’, and thus remains unresponsive to shy Kees’ overtures. When the hunk finally comes over to Kees’ place while his parents are away, a desperate disappointment with a tragical twist is in the making…

On the VHS version I saw, only the Dutch words spoken during the French class were translated into the English subtitles. And if even if other versions do translate the French, it would be really hard to do it justice.

The French class scene would have been really hard to follow if I were relying on the subtitles. Early on, Charel copies or borrows Kees’s homework. The sentence the teacher asks Charel to read aloud (and praises because another boy has mispronounced it) translates as “It is worth it for me to do my own work.” The teacher clearly has it in for Kees. She purposefully makes him translate aloud the sentence “I follow a blind ass.” Kees is a dutiful good student and doesn’t realize (the way the teacher must) that he will be making an ambiguous statement in French sort of like “I see Uranus” in English is also “I see your anus”. “I follow” in French sounds the same as “I am”. So all the other kids laugh at him because the teacher has just made Kees say, “I am a blind ass.” 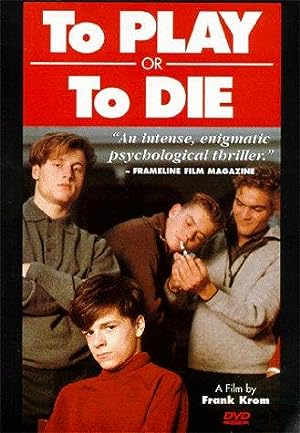 2 reviews for Spelen of sterven 1990 with English Subtitles