Three young Dutch amateur dirt bike motorcycle racers each fall in love with a young woman who, with her brother, works at a concession stand at the races. Everyone is looking for a better life. The young woman wants out of the business and away from her brother. The motocross racers want to make their marks as professional racers, like their hero, played by Rutger Hauer.

I just saw this film last night and was really amazed by it. Unlike the Verhoeven films that most American audiences are familiar with (Robocop, Total Recall etc) it was a compelling coming of age piece set in Holland. Like most of his early Dutch films, you can feel many of the hallmarks of his style coming together and it’s a testament to his skill as a director that he can make a small character-driven film about ordinary people like SPETTERS every bit as compelling as a gigantic special effects driven spectacle like ROBOCOP.

This is an 80’s disco motocross movie that has very little disco and very little motocross. What it has are many strong characters, all of them navigating life transitions and trying to figure out their place in the world.

As for the “shocking” scenes that a lot of people are referring to in the posts, there is a fair amount of sex and nudity (male especially) in this film but to call it “shocking” is misleading. The reason the film’s frank treatment of sexuality is so eye opening is the way Verhoeven handles it as no big deal. Two men sneak into a subway for a tryst, and you actually see one of the guys go down on the other guy. Two pairs of teenagers sneak into an abandoned building to have sex and you see it. Or when a man and a woman lay in bed talking after having sex, you see the guy totally naked as well as the girl. What happens happens and it’s presented as is.

Verhoeven doesn’t cut away from nudity, but at the same time doesn’t artificially sexualize it by zooming in it, laying in sexy background music etc etc. Like the co-ed shower scene in STARSHIP TROOPERS, it’s presented in a completely matter of fact way. Verhoeven doesn’t allude to anything in these scenes, and it gives the film a power and honesty and that wouldn’t be there otherwise.

Overall I would HIGHLY RECOMMEND this movie to anyone. 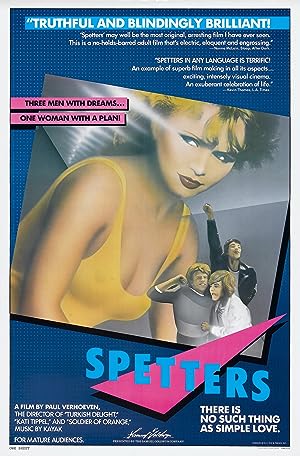